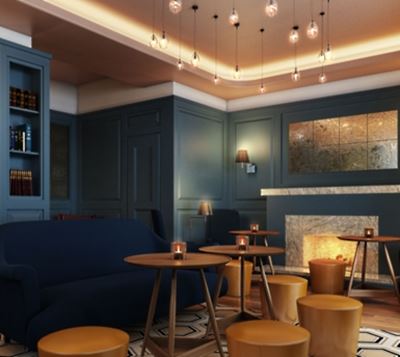 Update 22/1/14. Reservation lines are now open and Gordon's still a popular man as we hear that there were 1300 covers (seats) booked in the first five hours. Valentine's was apparently completely booked out in an hour but there are still spaces on other days.

Gordon Ramsay has been keeping busy. Hard on the heels of the long-gestating Union Street Cafe, comes London House, once more in south London.

London House will be taking over the space vacated by the Bennett Oyster Bar in Battersea, with the Head Chef being Anna Haugh-Kelly who has previously worked in kitchens in Paris, LA, Spain and Ireland. She's promising a Modern European menu with a focus on local British and artisan ingredients.

Dishes to expect could include: Crab and Scallop Tortellini with Black Radish and Crab Broth; Roasted Venison Haunch with Cauliflower Purée and Lentil Ragout and for desert Frozen Nougatine with Rhubarb Purée.

London House will open on 4 February 2014 at 10 Battersea Square, London SW11 3RA. It'll be open Tuesday to Sunday for dinner and Friday to Sunday for lunch. Reservations are now open and you can book on the website.