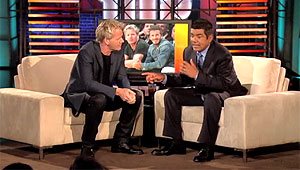 All those rumours that Gordon Ramsay was thinking about opening up an English pub in Los Angeles with his good friend David Beckham seem to have been true.

In an appearance on the late night George Lopez show in America this week, Ramsay was asked whether he was going to open a pub and he said yes. Asked what it would be like he said it would be 'modern British, somewhere cool, hip with good food...a good atmosphere somewhere you could go and have fun.’

There is one potential downside though, as Ramsay points out which may be why the pub's been a pipe dream so far; 'I didn’t think anybody drank in Los Angeles'.