[SIGPLUS_EXCEPTION_SOURCE] Image source is expected to be a full URL or a path relative to the image base folder specified in the back-end but /blog/2013/grhospital/gallery is neither a URL nor a relative path to an existing file or folder.
0
Shares 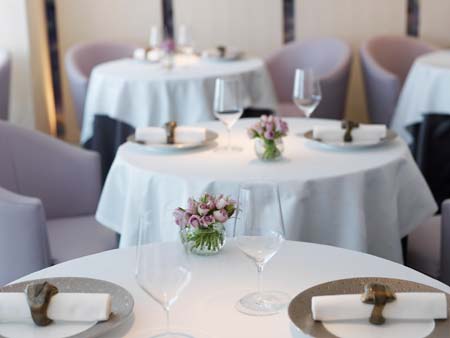 He may have spent most of the past year opening places in Vegas, but Gordon Ramsay isn't about to take his eye off the London market. Fresh from the annoucement that he'll be opening Union Street Cafe in Southward with David Beckham on board as a business partner, Ramsay has just declared new plans for his flagship restaurant at Royal Hospital Road.

As for why he's closing it, Ramsay goes on to explain: "I think every five years at that level, to reposition yourself is important. We've got three Michelin stars, the longest time a British restaurant has had three Michelin stars. So every five years, it needs to be moved up. Because you get criticized, easily. "Well, it's not worth three stars anymore, he's cashing in, he's never there"--all those kinds of things. So you gotta silence those critics by constantly reinventing."

Further details have since been revealed. The restaurant when it opens will see Clare Smyth returning in charge as Chef Patron in partnership with Ramsay - giving her a share of the business that she's helped retain three Michelin stars since 2007. "Restaurant Gordon Ramsay will always be very special to me," says Gordon, "and Clare becoming Chef Patron is testament to my partnership with, and trust in, her."

New features added to Hospital Road will be a "liquor library" and a new "chef experience table" which will allow restaurant regulars to have a bespoke menu created for them. The renovation itself will be Art Deco inspired and managed by Fabled Studio. According to Smyth, "The refurbishment is Gordon’s and my celebration of all that makes Restaurant Gordon Ramsay so special."