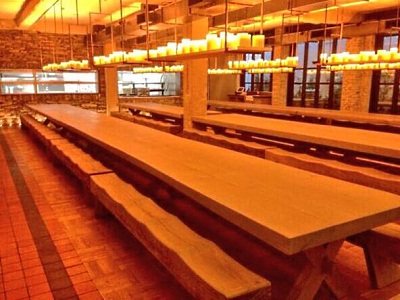 It wasn't so long ago that the folk behind Goodman came up with a cunning wheeze to sell burger and lobster for the fixed price of £20 in Mayfair. "It'll never work!" laughed the naysayers who have firmly been made to eat their words along with the tons of fresh lobster that Burger & Lobster now shifts every week to the likes of Nicholas Sarkozy (who was in just last week).

Now the same people are coming up with an equally challenging concept. Beast will open in Marylebone in early May selling a fixed menu focusing around King Crab and Steak for £75 a head. That'll include starters, sides, both crab and steak for mains and dessert, but it's undoubtedly a price that'll have some folk wringing their hands over how London is going to hell in a handbasket fuelled by foreign non-doms.

Hot Dinners grabbed some time with Dave Strauss, Ops manager at Goodman to find out just how the new place is going to work. Probably what'll have many city and hedge fund folk slightly perturbed is the fact that all the tables at Beast will be communal dining. "It's inspired by the food that Misha (one of Goodman's owners) has been enjoying in Norway, eaten by the sea in wooden shed on long tables."

There'll be two huge medieval-style tables of around 30 seats and two of 15 and yes, each one can be potentially be booked as a whole. "It's not the kind of place for a first date or for a business meeting where you need some privacy," admits Dave. "Think of it more as a dinner party or a banquet where everyone's having the same food." The main dining room will be at basement level but with a further 20 seats outside on a terrace.

Strauss says the pricing at Beast reflects how expensive King Crab is - apparently four to five times the price of good lobster. They'll be sourcing all of theirs from the Arctic Circle. The steak they've been testing the concept with so far has been ribeye, but there are plans to try T-bones and Porterhouse too.

Sides won't be as carb-loaded as you might find at Goodman or Burger & Lobster because of how much rich meat you'll get in the crab, so expect roasted beetroot, braised fennel and a smoked tomato salad as examples.

Wine-wise you can expect around 150 bins on offer. But the spirits list will be strictly limited to one gin, one vodka etc - only the best but at a price Strauss says will be very competitive; "our only cognac will be Hennessy XO but it'll be at the best price in London."

"There's no other restaurant like this in the world," he adds, confidently. "If you offer the best, lots of people are going to want to buy it."