[SIGPLUS_EXCEPTION_SOURCE] Image source is expected to be a full URL or a path relative to the image base folder specified in the back-end but /blog/2014/meatopia2014/gallery/ is neither a URL nor a relative path to an existing file or folder.
0
Shares

Goats, cows, lamb and more as the chefs gather for Meatopia 2014 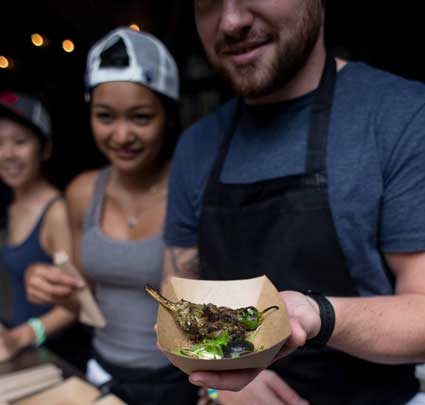 The second edition of Meatopia proved without a doubt that meat is still well and truly on the menu for Londoners.

Thousands of carnivorous revellers poured into Tobacco Docks yesterday to see the who's who of the UK meat restaurant scene and experience a day of meat related festivities, presided over by some of the world's top talent.

Hot Dinners had a very good look around and we've chosen a few of our favourite dishes which are showcased below alongside their chefs.

This year was notable for the sheer range of dishes on offer. We started rather sensibly with one of Dan Doherty's delicious lamb chops, served with a smoked aubergine puree, a fantastic way to begin.

This was swiftly followed by bone marrow and curry from the ever popular Burnt Enz stall, Dave demonstrating why he deserves to have a London restaurant.

We continued our way into the heart of the action, meeting Brad McDonald and trying his rather excellent Chicken and charred spring onion dish, a refreshing shift away from all the red meat on offer. We headed back out to see Neil Rankin and try some of his goat which seemed to be attracting rave reviews. And for good reason, his pulled goat taco was one of the best things we ate.

Special mention must also go out to Hawksmoor and Grillstock (Bristol) who both managed some impressive results using rather humble cuts of beef. Speaking of beef, we were rather enamoured with Charlie from Flatiron's effort, replicating his effort to spit roast an entire Dexter cattle, the results are to be served up today (Sunday), so if you're thinking of heading down, make sure you get here early!