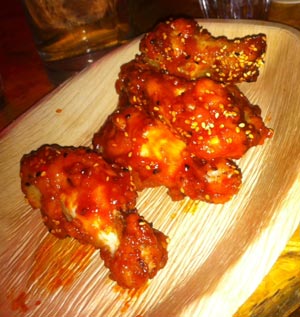 As if Korean-style wasn't already a huge thing with Psy's Gangnam Style topping the charts, it's also fast becoming a big thing in the London foodie world.

TV chef Gizzi Erskine cooked up a storm at the first night of her K-Town Korean pop-up at Concrete under Pizza East in Shoreditch and Hot Dinners popped down to catch the first night's fun. We were met with a pear and shochu cocktail before sitting down to one hell of a feast. Gizzi freely admits to how inspired she is by David Chang of momofuku fame and having most recently eaten his food at St John, Soho we could see his influence here.

But these were all a prelude to the real showstopper - a slow roasted lamb shoulder 'Bo Ssan' served with kimchi and sticky sushi rice for us to rip apart and wrap up in lettuce. It was as good as it sounds - but unhappily the low lighting meant the pictures we took just didn't even begin to do that dish justice.

Desserts were a mixed bunch of ice-creams with miso caramel tuiles - we loved the miso ice-cream, but were not at all keen on the green tea flavour. And sadly we didn't make it as far as the final course of green tea and yuzu meringues.

Entertainment came in the form of a burlesque act who performed to the Star Trek theme tune as the lovechild of Sulu and Uhura. Yes, it was that kind of night. We slipped away and let the young 'uns tear it up until the wee small hours of the morning.

K-Town continues until Friday. It's sold out but you can pop by for drinks and entertainment if you don't have a dining ticket. Tickets are £10 for after 10pm and include one of those rather lovely pork buns. Click here to book.