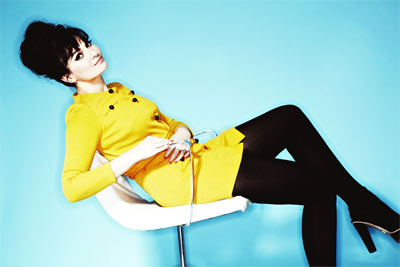 Hot Dinners passed the new King's Cross roller disco while walking back from Grain Store the other week and we were mightily impressed with the set up (and the look of the Disco Bistro menu too). While @hotdinners2 has already said that nothing short of "at gunpoint" will get him on roller skates we do think it looks like an ace night out (and you can eat without the skating part if you want).

There are also quite a few takeovers to look forward to, with Street Kitchen serving up burgers tonight and Gizzi Erskine taking over on August 14. Gizzi and Disco Bistro's Carl Clarke have teamed up before, and their K-Town pop-up looks like a big influence to her take on the menu she's cooking up for the event.

Gizzi's been tweeting some of these creations - like this Banana Split - and it all looks fantastic.

Tickets are on sale here at £25 for all of the above - and Gizzi will be on the decks for a DJ set on the night too as you whizz around the track.