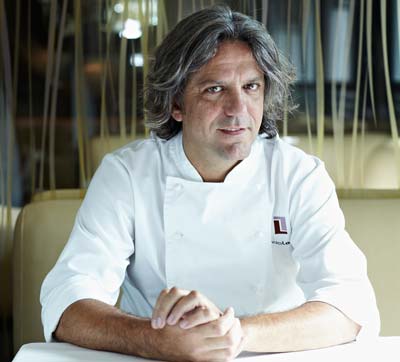 He has one of the best Italian restaurants in London with Locanda Locatelli but that's definitely more of a a special occasion place for most folk. So now Giorgio Locatelli is trying his hand with his wife Plaxy Locatelli at more casual dining fare with a three week-long pizza pop-up, Pizza Locadeli, in Marylebone. As the couple used to be patrons of Spiga, one of London’s first wood-fired pizza restaurants, which they opened in Soho in 1998, this very much sees them returning to their London roots.

On the menu will be wood-fired pizzas using seasonal ingredients, including the ‘Toscana’ with finocchiona salami and roasted pepper and ‘Seaside’ with swordfish, clams, salmoriglio and prawns.

There will also be light antipasti, meats and salads with Italian spritz, wines and craft beers plus small dishes including Parma ham and figs, Autumn salad and a selection of stuzzichini. Topping off the menu is a selection of pastas from spaghettini with clams, garlic and chilli to the Autumnal chestnut tagliatelle with mixed wild mushrooms, butter and chives.

There will also be a bar upstairs, which will serve a simple menu and a short list of wines, beers and cocktails, which will focus on the Italian classics alongside more contemporary choices.

Of course, with the Locatellis at the helm, this is no ordinary pizzeria. They've joined up with artist Dinos Chapman and more of their friends from the art world who will design the plates and staff t-shirts. And once the pop-up ends, those plates will be auctioned off for one of Hot Dinners' favourite causes, Action Against Hunger,

“Pizza will always be ingrained in Italian culture and it is one of my favourite staples" says Locatelli. "I am really excited to be going back to the days of Spiga and creating some delicious new pizzas in a casual and relaxed space, appealing to everyone.”