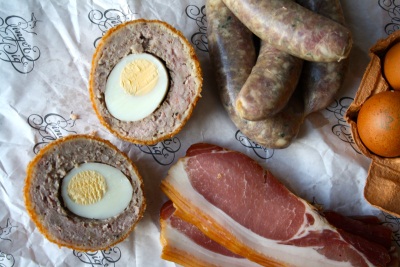 Like most London foodies we're partial to the odd scotch egg or 10 (see our report from last year's Scotch Egg challenge), so news that Ginger Pig were coming out with a new one certainly merited our attention.

The limited edition Bacon & (Scotch) Egg will be in their shops for a short period from Thursday this week. Made from free range eggs wrapped in sausage meat and smoked bacon, coated in breadcrumbs deep fried, they sound fantastic.

The Ginger Pig egg will be available from all their London shops – Clapham, Shepherd’s Bush, Marylebone, Waterloo, Borough Market (excluding Hackney), for a few weeks only, and will be priced at £4 each.