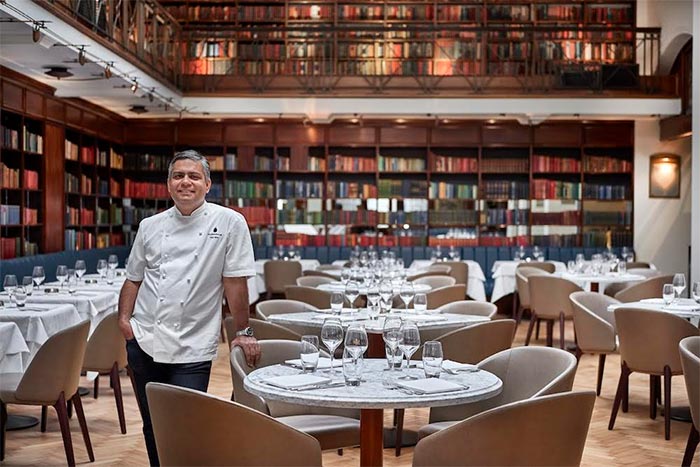 MPs heading back to London after the summer recess have a new-look restaurant to check out. The Cinnamon Club has been closed while parliament has been on its holidays and has now repoened after a six week, £1m do-over. Everything from the private dining room to the main dining area has been reworked and they've extended that new brush to the food too.

Executive Chef Vivek Singh and Head Chef Rakesh Ravindran Nair have all manner of interesting new dishes planned for the menu and there's a distinct focus on the kind of sharing, family-style dishes that are proving popular in other parts of town. Many - including dishes like an incredible looking lamb dish - will be brought to the table on a trolley to be carved tableside. Plus a set feast of tables for four includes:

Speaking of trolleys, we're pretty sure the addition of a new gin trolley in the restuarant's Library Bar will prove popular with politicians and lobbyists alike. That'll have 20 gins and they'll be serving cocktails, including the Aromatic Martini (Monkey 47, Belsazar vermouth and tea bitters) and gin punch too. There's a new cocktail menu in the bars too.

The Cinnamon Club has re-opened at the Old Westminster Library, 30-32 Great Smith Street, London SW1P 3BU. Telephone 020 3355 1418. Keep up with their news on Twitter @cinnamonclub