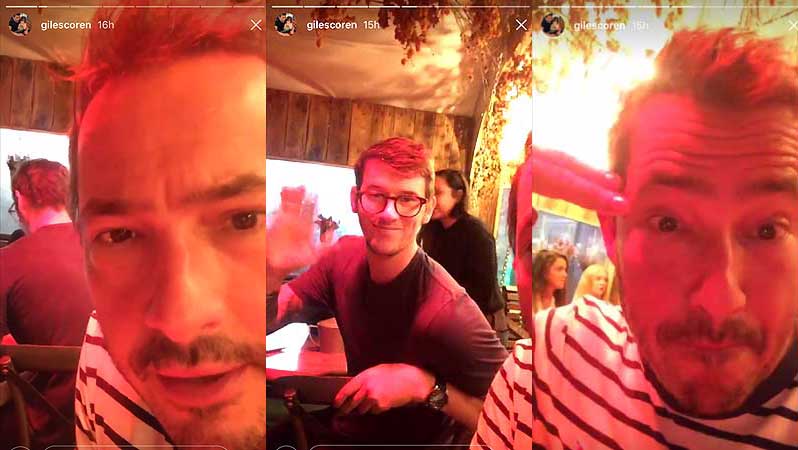 Updated with restaurant review by Giles

It feels like only yesterday that Instagram was the kind of place where nothing bad happened. Here was a social media platform far removed from the nastiness of Twitter and its trolls, where folk posted pictures of their food, other people liked it and all was well.

But something has gone wrong in Paradise. Or, more accurately, someone. Critic Giles Coren is a relatively recent convert to Instagram and following his most recent engagement, he may be wishing he'd left it well alone. Last night, Coren was at Adam Handling's restaurant The Frog when he became irritated by the behaviour of a fellow diner. Back in the old days, this was something he could have whinged to his wife Esther, who he was dining with, and that would have been it. But Giles took to Instagram stories instead to vent his anger.

Filming the offending diner covertly, Giles fired off a series of stories. "The guy at the next table is on his fucking laptop - all through his meal... an hour later, he's still at it..." it began, culiminating in a final rant of "These fuckbags bringing their cunting offices to the fucking restaurant. Stay at work and get a fucking Nandos you shitheads!"

But the next story revealed all. The diner in question was none other than the chef Handling himself, doing a little work in his own restaurant. All credit to him, Giles not only apologised, saying Handling was a lovely guy and that his restaurant was terrific, but has, fair play to him, kept the whole thing up on Insta (or maybe he hasn't worked out how to delete stories yet).

Talking to Hot Dinners, Handling explained the circumstances. "I had dinner in the corner of Frog E1, because I've not checked up on the restaurant for just over a week. I went to eat quietly - to keep a eye on the quality of the food. I work from 6am till 2am and am running four restaurants so I've got a hell of a lot of paperwork so any chance to do some I take that opportunity."

"I love Giles," he admitted. "I follow him on social media and he is funny. When I surprised him he was so shocked and embarrassed. We have all been there. Look at me, prime example! But I've always wanted to meet him! He's such a nice guy and I laughed all the way home while watching it over and over again."

We'll leave the last word in this story to Giles himself: "If we have to draw a lesson from the evening - if you're a grumpy, shouty, opinionated twat like me, stay home because if you go out you're going to make a fucking tit of yourself and wish you were dead."

More about The Frog E1

Want to keep up with all the latest restaurant news in London? Sign up for our newsletter.