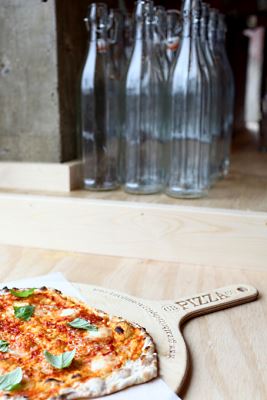 Already hugely popular in Margate, where their pizzas earned them a Runner-up prize for Best Cheap Eats in the 2013 Observer Food Monthly Awards, GB Pizza Co is heading for London. They'll be opening up their first restaurant in Exmouth Market this Spring, two doors down from Blackfoot.

So what can you expect? Well they pitch themselves as a having a modern British outlook on pizza. Weekly specials are inspired by what's in season, so there's the Full English with a poached egg as well as the Fennel Salami using salami from Cannon and Cannon in Brixton Market. All the pizzas will be thin and crispy and made in a wood-fired oven. But to be fair, they had us at "customers can help themselves to organic wines from bespoke barrels".

Sides include chilli fried broad beans while a short dessert menu featuring salted caramel tart and chocolate brownie also offers ice cream from Gelupo. Coffee is from Climpson & Sons and there'll be Peroni on draught as well as craft beers by the bottle.

“We can’t wait to serve our pizza in the capital," say the owners Lisa Richards and Rachel Seed. "We’ve taken the most important aspects of Italian pizza making and introduced great British ingredients including UK-made buffalo mozzarella, 00 flour and nduja salami; even the tea we serve is from Britain’s only tea plantation."

GB Pizza Co will open April 12 at 50 Exmouth Market, London ECR1 4QE. There will be a soft launch that weekend with 50% off pizzas. To book, email lisa@greatbritishpizza.com. For more information follow them on Twitter @gbPizzaCo.