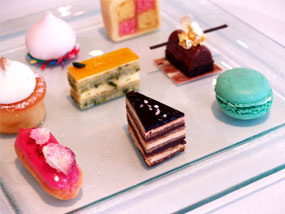 Fresh from the excitement brought on by last night’s Great British Bake Off, Hot Dinners is in a dreamy cake state of mind with the news that patisserie chef Claire Clark, formerly of the French Laundry (widely agreed to be one of the best restaurants in the world) is opening a mini-patisserie on the Fifth Floor at Harvey Nicks for two months.

Showing the utmost restraint, by not referring to it in any way, shape or form as a pop-up, a spokesperson for the Knightsbridge store said: ‘We’re delighted to announce an exclusive collaboration with Claire Clark, one of the best pastry chefs in the world.’ Clark has also worked at Sandy Lane, The Wolseley and Claridges.

If you’re on a diet, then look away now, because the cakes she’ll be serving up sound utterly mouthwatering – Jaffa cake macaroons using Amedei 70% Toscano Black chocolate, fizzy strawberry marshmallows, toffee bark with salted pecans, not to mention traditional loaf cakes including orange, pistachio and semolina cake and rhubarb and spelt cake.

If you’re feeling particularly indulgent, you can book a spot at Claire’s afternoon tea where the menu features Bubblegum Marshmallow Pavlova, Rose and Raspberry Éclair and warm chocolate cherry cake.

The patisserie and afternoon tea menu launches on 13 September until Thursday 18 November.To book a table for tea call 020 7235 5250.