Forzawin is back in east London for the winter with Forzawinter 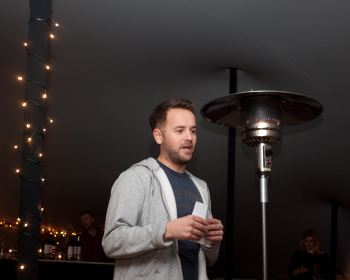 Earlier this year, Pizza Pilgrims teamed up with Bash Redford and took over a Shoreditch rooftop for a series of summer events offering pizza, cocktails and entertainment. Now, the fact that winter is here hasn't put Bash off, who's carrying on with "Forza Winter" (you see what they did there). Taking the weather into account, they've been constructing a new roof and have employed lots of ways of keeping people warm through the winter months. They've also changed the menu to focus on Fonduta (more of that later).

We caught up with Bash (pictured right) to find out what to expect...

First up, can you let us know what's changing on the roof for winter?

What's not? Cuisine, layout, drinks, everything! We've covered the terrace using a tensile structure, drafted in an army of heaters and more vintage blankets than you could shake a stick at. We've also put our market stalls away for the winter and had some beautiful round tables made, so that the Fonduta can be shared more easily.

And how about drinks - we hear there will be hot cocktails, can you give us an example?

Jonny Pannikou from Oval Space has been beavering (read "drinking") away at the creations on the bar. He has a delicious range of hot wines and cocktails. We've also been working with our mates at Wondering Wine to come up with a decent list of Italian Biodynamic Wines to go with the meal.

And what about the food - can you tell us what you're planning?

Well, we've put away our ovens and pizza peels in favour of some enormous pots of bubbling stringy fonduta. It's a Northern Italian dish prepared with raw milk, butter and eggs that is traditional to this time of year.

Alongside it, there'll be lots of vegetables which we're getting from Andreas at Andreas Veg. He's sending over the best Seasonal British grown stuff he has each week (so it'll be different each week) as well as some pork we're getting from Ginger Pig (which we'll make into Proscuitto. There will be sourdough breads from E5 and to finish off, some of Gelupo's totally awesome 'Coppa' for everyone.

There's A LOT of food, so people should be able to forget the cold by filling up!

And do you have anyone confirmed for the entertainment yet?

We're speaking to a number of bands, have our house band 'Josh Flowers & The Wild' coming back and we're also deep in discussion with 'Lemonade & Laughing Gas' about some slightly different entertainment - more to come on that.

ForzaWinter is sold out until the end of the year, however they will soon be announcing three new dates for the end of November. These will be announced via their twitter feed @forzawin (ter)

Bash is also considering extending the pop-up through till the end of January. More details to be announced via their website forzawin.com

Photo by Louis Fernando of Tuck and Vine.