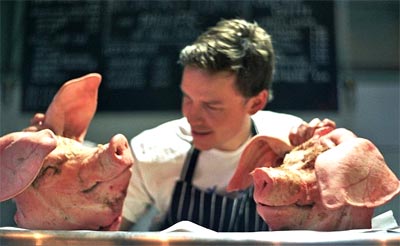 When the former Head Chef at Brunswick House, who’s also done time with the Young Turks, announces plans to open up a restaurant called Salon on Brixton Market it’s fair to say we were very interested. And with dishes planned like rosehip fizz, razor clams & sobrasada, duck hearts with celeriac & lardo or pheasant, cauliflower & pine on the menu it'll definitely be one to watch. So we tracked down Nicholas Balfe to see if we could find out a bit more about what Salon, upstairs from the Cannon & Cannon deli, will have to offer.

How did you team up with Cannon & Cannon?

I met Sean & Joe, aka Cannon & Cannon, about 18 months ago when they held an event at Brunswick House, where I was Head Chef at the time. They asked me to design a menu to promote their entirely British range of Charcuterie and Cheese, which turned out to be a lot of fun. We all got along, I thought the products were great, and I admired the way they turned their passion and hobby into a living... much like I had a few years previously I guess.

We stayed in touch and at the beginning of last year I got a call from them saying they were opening a deli in Brixton. They asked if I could help them put a menu together that could be prepared using very basic equipment, by people who'd never had any experience in professional cooking before. Of course, I said I'd love to and have been working with them ever since. I've been tweaking the menu, training staff and generally making a bit of a nuisance of myself by hanging out in the deli, eating bits of cheese of meat. Six months on and we had a busy little eatery, with lots of happy customers and a couple of good reviews too.

What made you decide to open up your own restaurant now? And why Brixton?

The whole thing came about quite quickly actually... We were all really happy with the way things were going at the deli but at the same time we also knew there was much more potential to be realised. I did a supper club at the deli in early October and it was one of those nights where everything just clicked. The vibe was great and people seemed to really like the idea of coming to that space for a full-blown five course menu, as opposed to just a couple of platters of cheese or cured meats. The food all worked out spot-on too, although I guess I should thank Tony from the Portuguese cafe down the road, whose oven I hijacked for the night!

It was after that I realised that we should be making much more of the great space we had and the great ingredients we had access to through our suppliers. But it wasn't going to be possible without a proper kitchen. So, I've invested some of my own money into the project, and taken over the space upstairs from the deli to open my own restaurant, Salon.

As for Brixton, well I don't think there's a more exciting place to be for food in London at the moment. It's all changing so quickly. There's an energy about the place that you can feel in the air and the people who come to the market are genuinely excited about food and drink, and up for trying anything.

How would you describe your style of food?

I guess the food will be contemporary British; fresh, seasonal, interesting and varied. A mate of mine once described my cooking as 'mad flavours and vegetables you've never heard of', which made me chuckle. I guess that was compounded in my stint earlier this year with the Young Turks – the undisputed UK champions of the foraged antique herb! But seriously, I'll be using lots of charcuterie and cheese from Cannon & Cannon, plus I've put in lots of time and effort finding great UK suppliers that I can trust for meat, fish, fruit, veg, and so on – almost all direct from the producers themselves.

Ultimately I'll be cooking the stuff I'd like to eat that day, but using very British building blocks. There's a bit of a fast food thing happening in Brixton Market at the moment, and the other places there are doing a great job at cooking food from all over the world, but hopefully Salon will balance that out a little.

What about the look of the restaurant and how many it will seat?

In a word, small. At the moment we're looking about 26 seats in the dining room, and a fair chunk of the space will be taken up with the kitchen. We're going to be storing a lot of our produce and ingredients in various places around the room and in the deli, so as a diner, it's going to feel like you're right in amongst it.

I love the energy and togetherness you get from a supper club, so we're going to be continuing that theme to a certain extent, running a four or five course set menu every Thursday night, which will change weekly. On Fridays and Saturdays, the menu will be in more of a sharing format, so people can try lots of interesting little dishes without necessarily having to stay for a multi-course feast. This is kind of how people use Brixton Market, so it seems to make sense really.

We'll also be doing brunch on Sundays, plus a simple but tasty deli menu which will be served at lunchtimes and downstairs.

What about drinks - what are you planning?

The wine list will be interesting, affordable, and regularly changing, with a focus on natural wines, and even a couple from English producers. We've got a decent selection of sherries, since they work so well with the cured meats, but we've also had lots of fun sourcing other less common aperitifs from the UK – some beautiful ciders and perries for example, that quite easily stand up to the best Cavas and Proseccos.

We've also got some amazing wild fruit-infused spirits, made by a forager friend of mine, plus I'll be making lots of my own seasonal syrups and purées to give classic combinations our own twist. Oh, and we'll be serving the mighty Kernel beers too!

How can people book?

We'll be open to the public from 6th December 2012, with previews the previous two weekends and because of the size, we'll definitely encourage bookings. Just give us a bell, email, or stop by. We'll also have space outside on Market Row for people just passing by. Additionally, the space will be available for private dining on Tuesdays, Wednesdays, and weekday lunches.

For more information go to www.salonbrixton.co.uk. To book call 020 7501 9152 and you can follow them @Salon_Brixton