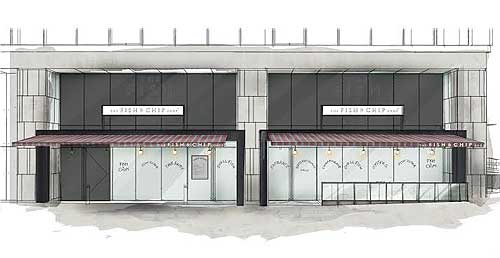 Following on from the successful opening in Islington, Des McDonald is bringing his modern take on the chippy to the City. The Fish & Chip Shop will open on Old Broad Street in October. And if you're quick you can get in on the 50% off food soft launch offer on 2nd and 3rd October.

The City branch is going to be bigger than its Islington counterpart with new dishes and an area for alfresco dining. In the kitchen will be Steve Wilson, formerly of Scott’s and Daphne’s, while the bar will be run by Allan Farrell, former Bar Manager at Sushihno.

In addition to great fish and chips the city branch will feature a raw bar serving West Mersea Native No.2 oysters, Lobster grilled or served with mayonnaise and Fruits of the Sea for two. Starters include; Seared scallops with cauliflower and golden raisins, fresh Isle of Bute rainbow tartare. But you'll still be able to get the London particular fritters that were so popular in Islington.

As for mains, new dishes include Roasted Dover sole with brown butter and lemon and Monkfish vindaloo served with cumin rice.

The City restaurant will have room for 60 diners with an additional 16 seats outside as well as a dedicated takeaway window. And you'll be be to hire the space out on the weekends.

The Fish & Chip Shop City opens on Wednesday 15 October at Dashwood House, 69 Broad Street, London EC2M 1QS. Opening hours are Monday to Friday 11.30am till late. The soft launch runs from Monday 13th to Tuesday 14th October with 50% off the food bill at lunch and dinner. To book email them at city@thefishandchipshop.uk.com.