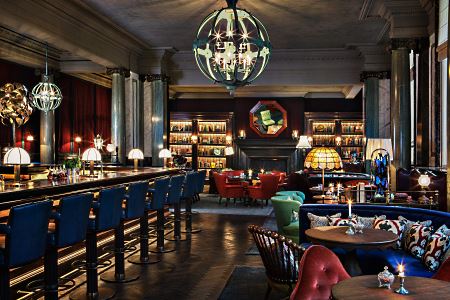 Apparently there are forces at work to rebrand Holborn as Midtown. If they succeed, it'll probably be in part to the super glamorous new hotel that opens today - the Rosewood London.

We popped along last night for a preview of the hotel's public spaces, namely the bar and the Mirror Room where the hotel's executive chef Bjorn van der Horst is in charge of an all day dining menu.

It would be fair to say a LOT of money has been spent on this place. Hot Dinners really does like a bit of hotel luxe and this place has it in spades. The bar, which dangerously is open till 3am, is all parquet flooring, open fires and pewter candles. We tried a couple of potent, well-made cocktails and we'll be back to try the bar menu which focuses on curries and stews.

As befits an all-day social dining menu, the Mirror Room's menu does have the standard club sandwiches and burger you'd expect. But it also has some really interesting dishes including partridge escabeche (£14), rose veal tartar (£16) and a milk-fed lamb with sweetbreads and Guinness pie (£21). Cocktails here are £10.50 a pop and include Martinis (dirty to filthy), Sidecar, Old Fashioned and Sazerac.

You can also sit in the drop dead gorgeous lobby (like the National Gallery but with cocktails) and enjoy drinks. And if you think the Rosewood's hotel manager Michael looks incredibly familiar, that'll probably be because you recognise him from the Claridges documentary where he was Operations Manager.

And all this is before the Holborn Dining Rooms - run by Des McDonald - opens in February, which is bound to be a huge draw too.