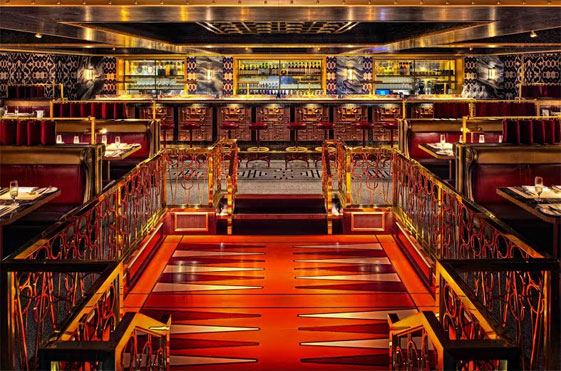 We've been trying for what seems like months to get into the downstairs bar at Bob Bob Ricard - every time we go we've been told it's STILL under refurbishment. We'd started to think the doorman there was putting on a really good poker face and that the rest of London was down there partying. But now there's proof that the new Club Room is at least in the process of being unveiled.

This is the first picture we've seen of the £3m makeover which has resulted in a 74-seater Club Room. As you can see it features booths tiered around what looks to be London's most beautiful dance floor. And - as you've come to expect - there'll be buttons instructing you to "Press for Champagne" on every table.

The Club Room will is open only in the evenings for what the restaurant describes as ‘lively dining, music and champagne’ and you'll be able to order from the full restaurant menu and wine list.

"We want to offer the class and sophistication of old-school dining clubs like Annabel’s," explains owner Leonid Shutov, "but without the need for membership.”

The Club at Bob Bob Ricard is expected to open officially in September, however they're currently having a soft opening until the end of July offering 25% off all food throughout that period. For tables of 4 please contact main reception. For tables of 6 or 8 please email clubroom@bobbobricard.com. Opening hours are Monday to Saturday, 7pm to 1am. Closed Sunday. There is an 'upscale' dress code in force.