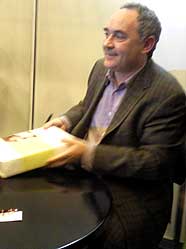 To the Restaurant Show at Earls Court today where celebrated chef Ferran Adria from El Bulli had words to strike fear into anyone who's still trying to get a reservation at his restaurant. It seems that Adria has been in talks with his El Bulli colleagues about the future of the restaurant and one option is to make the whole thing more intense. In practical terms, that may mean opening the restaurant for just one month of the year while Adria and his chefs spend time in other countries, such as China, seeking inspiration and regeneration.'I'm the only one who knows,' he says of his future, 'but it doesn't just depend on me, it's also the people I work with. I have to reinvent myself.'

Right now, competition to secure one of the 6500 places available is intense, to say the least, with millions of applications made each year. The chances of more tables being available seem to be evaporating as each year goes past.

El Bulli's open season normally runs from April to October but this year it's open from June to December, a decision that Adria said helped boost creativity by giving him and his colleagues access to different seasonal produce, and one that he will replicate again next year. One dish he mentioned sounded particularly fanatastic - a cognac glass full of what looks and smells like Armagnac, but on tasting turns out to be a quail consomme. It's accompanied by an edible autumn leaf whose veins are actually quail liver pate.

'I've achieved a thousand times what I'd dreamed of,' said Adria, who admitted to cooking from 10 in the morning 'till 2 in the morning 130 days of the year. 'Why do I carry on? Because of ego. I have everything I want, I don't like expensive cars or boats, I have a normal life, like most of you.' He said that while he could make millions by simply putting a year's worth of sittings on ebay, 'I couldn't be here talking to you, it wouldn't be honest for me, talking about gastronomy and then selling myself.'