Fera at Claridges by Simon Rogan opening in May 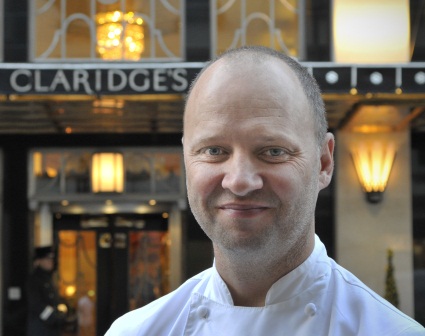 It would be fair to say that the opening of Simon Rogan's restaurant at Claridge's is the most-anticipated London restaurant opening this year. We've had some clues as to what it might involve - but until this morning we didn't know what it was going to be called or what exactly it would serve up.

Now we know it'll be called Fera at Claridge’s. The word which means ‘wild’ in Latin will reflect "both the primal influence of nature and the highly seasonal ingredients used in Rogan's cooking" a press release from the hotel announced today.

To find out more, Hot Dinners grabbed some time with Simon Rogan himself today. Beginning with the choice of name - Rogan says the process for choosing it was "meticulous" and they all wanted something that would sound just right and they wanted it to work on a world class stage.

Rogan and his team are currently in the process of finalising the menu which they've been working on since late 2013. It's been developed in Cartmel but they're now eager to get it into the kitchen and "try it out in the surroundings where it will live". While the dishes in Fera are all new, you will see snippets of what you may have tried before at L'enclume, Roganic or The French, but with a totally new makeover.

As you might imagine, Rogan is keeping exact details of the menu close to his chest at the moment, but he did tell us that the grilled salad which you'll have seen on the Great British Menu is making a return "in a completely new guise and serving technique" which sounds intriguing.

As for the menus themselves - there will be an a la carte menu for £85 with about four choices per course (but he said to expect a lot more thrown in too) as well as two tasting menus - a ten course for £95 and a 16 course for £125. They're still working on the set lunch menu, understanding the need to make it a competitive but quality offering as Rogan's key wish is for Fera to be accessible to all.

The restaurant's interior is being designed by British designer Guy Oliver. The main restaurant will seat 90 and the old private dining room at Claridge's is being divided into two - with something quite special coming out of that.

Half will be a traditional private room for 12 - but the other half will be a London version of the Aulis development kitchen in L'enclume. Seating eight, that will be in the corner of the restaurant where you'll see the latest development dishes for Fera cooked right in front of you before they appear on the menu. Sometimes it will be Simon Rogan cooking and sometimes Executive Chef Dan Cox and they'll be "mixing it up as we don't want people to know what to expect". The table will be overlooked by a mezzanine which will be Fera's development area - and he says they're looking forward to putting it to good use.

As for Rogan's mammoth commute? He's started calling the 300 mile journey between L'enclume, The French and Fera the "CarManDon" route (we'll let you work that one out for yourselves). As with the launch of The French he is committed to staying in the city as long as needed to make sure everything's just right - but stresses that he's surrounded by great teams in all his restaurants (and we think the reviews certainly back that up).

Frankly we think it's all sounding like it's gearing up to be the opening of the year - just as we expected. A table here will one of the hottest tickets in town.