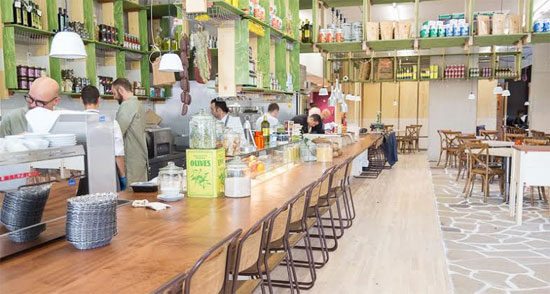 Updated 23/10 with the confirmed opening date.

The next year promises to be a big one for King's Cross. Many new office blocks are about to open there and alongside those, plenty of space for brand new restaurants. And one of those will be the new Greek Larder coming from Real Greek founder Theodore Kyriakou.

What you need to know about The Greek Larder

It's coming one of the founders of Livebait and the Real Greek. Theodore Kyriakou is joining up with Panos Manuelides for this brand new venture.

The restaurant is an all-day affair, serving "traditional recipes, many updated with a twist". On the menu in the restaurant there will be Grilled trahana cake with crevettes, Cretan deep fried courgette flowers stuffed with feta and sprinkled with thyme honey, stuffed vine leaves with smoked eel and Pastourma with smoked pork and a Syros parsley sauce. Alongside this will be Meze including souvlaki, filo pies and sweets including Manouri mousse with orange blossom honey and pistachios. The restaurant will seat 80 - 100.

And there will be lots to take home from the store. They're looking to showcase independent regional producers from Greece. So expect cheeses, specially cured pastourma, charcuterie, olives, Cycladic honey, pulses, beans, traditional sweets and delicacies. Plus their own beer brewed with Greek hops and malt and wine from Santorini.