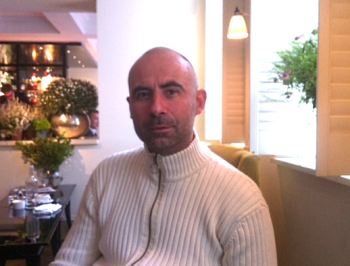 Ever since he returned to London there have been rumours that Eric Chavot (lately of The Capital where he had two Michelin stars) was going to open a London restaurant. This morning, those rumours finally bore fruit with the announcement that Eric had signed up to open a French brasserie at the Westbury Hotel in Mayfair.

Never one to be left waiting for a story, Hot Dinners sat down with Eric this lunchtime to get the inside info on his new restaurant. Take it from us, that man can talk for Britain (or France). So while we work through the transcript of our chat, we thought it best to tide you over with some basic facts about the new place.

The restaurant is going to be a 70-75 seater and will be where the Gallery restaurant currently is to the left of the hotel entrance as you look at it. There'll be a small bar as you enter for pre-dinner drinks, banquette seating and then at the back of the room will be a seafood bar with five seats for counter dining. ""We're going to make it very Chavot, take off the pictures, put in smaller chairs and beautiful banquettes and there's a huge bar at the back which we're going to pimp."

Food wise, the dishes will be 'classic modern' and range from around France, but this won't be Michelin-style dining. You can expect a mini cassoulet for one or a cocotte. For seafood, forget the classic fruit de mers, instead there'll be king crab mayonnaise, beetroot salad with pate de tete, homemade choucroute, their own terrines 'a beautiful selection of salads', partridge with cabbage and a stuffing made from the legs (at this point we begged him to stop describing it to us on an empty stomach).

'It'll be very reasonably priced for Mayfair,' he promised. 'There'll be a nice long menu - with lunch at around £35 and dinner at £55. No set menu, but there will be specials.'