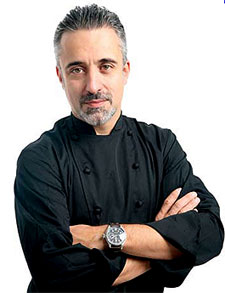 He's described by Wikipedia as a disciple of Ferran Adria. Now Sergi Arola, the El-Bulli trained chef, and owner of two Michelin stars in his own right for his restaurant Gastro in Madrid, has quietly opened a wine restaurant in London.

Situated on the banks of the Thames, opposite the Tate Modern and beside High Timber restaurant, the Durius Cafe is the fifth in a chain of cafes which were first launched in Spain this Spring.

With a serious focus on wine, the menu features wines from the Marqués de la Concordia label, as well as wines from Rioja and Rueda. Arola was brought in as executive chef to develop a cutting edge, new-wave Spanish menu matched to selected wines from the Marques de la Concordia portfolio which sources fresh, seasonal produce from the Duero River region. 'It's a fusion of tradition and innovation,' explained Arola, 'healthy food that's also fun'.
0
Shares