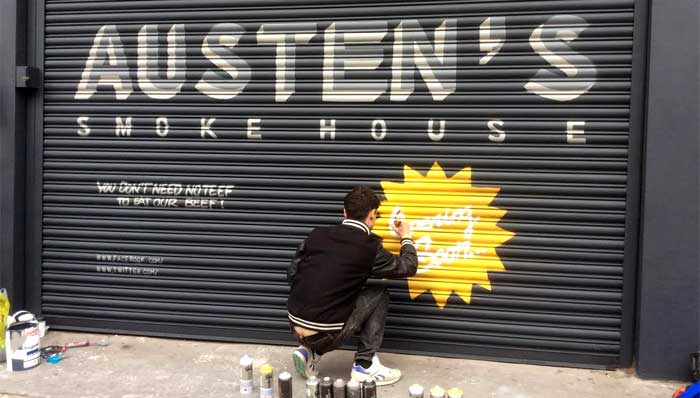 Another day, another new barbecue restaurant announced for London. But Austen's Smokehouse, which is set to grace Kensal Rise with its presence very soon, certainly has a few things going for it that no other 'cue place does. The first is who's running the show here - none other than BBQ maniac DJ Yoda. Hot Dinners grabbed some time with him to find out what a DJ is doing opening a restaurant.

What was the thinking behind Austen's?

"My music has been inspired by food since day one - from tracks like "Pizza" with Sway, "Breakfast Cereal" with Biz Markie, and, of course, my new album "Breakfast of Champions". I even once recorded a whole DJ set of tracks about food, whilst simultaneously cooking my own dinner! So getting involved in a restaurant seemed like the next step for me to join my two great passions of food and music."

"So much of the music I play comes from the American Deep South, I felt like if my favourite music was a food, it would be BBQ. So, inspired by some of the amazing food I've had whilst DJing in places like Texas, here we are with Austen's!"

So what's going to be on the menu?

We will be smoking pork butt, USDA brisket, beef ribs, St Louis cut pork ribs, chicken, House hot link sausage, and serving the meat as in America either naked, in sliders, on a Kaiser roll or milk bun."

Your plans for brunch sound pretty epic - can you expand on them?

Who's going to be in the kitchen?

"A chef very experienced in the way of cooking slow and low with smoke, trained by one of America’s best. Worked in one of London’s busiest and best BBQs but cannot mention their name yet for contractual reasons."

"Austen's will have their own house lager brewed for them by And Union. Full-bodied with malty with hints of green apple and honey on the palate. It pours clear and golden with a biscuit aroma and a herbal hop accent. We will also have the full range of And Union lagers, wheat beers, and ales on tap along with a guest, and of course with a great bottle selection from the UK and further afield."

"Austen's is eat-in over two floors with 80 covers. Upstairs is bookable, downstairs is reserved for walk-ins. Music will be provided by myself, DJ Yoda!"

Austen's Smokehouse will open 8 August 2015 at 109 Chamberlayne Road, Kensal Rise, London NW10 3NS. Opening hours will be every day from 5pm. Keep up with their news on Twitter @austensbbq