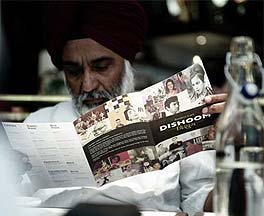 It's already a hot spot in Covent Garden and now Dishoom is opening a second place in East London. Dishoom Shoreditch will open in October 2012 on Boundary Street. They'll have a bar, café, kitchen dining room and courtyard.

It's bound to look amazing if the appointment of top designers Russell Sage Studio is anything to go by.

For good weather days you'll be able to sit in the courtyard while inside will be an airy bar space, bakery and café seating, and a kitchen dining room on the lower ground floor. Opening hours will be from breakfast through to dinner.

On the food front - expect all the favourite from the original Dishoom with a few additions. Their house special will be Lamb Raan – a whole leg of lamb marinated in chilli, garlic and ginger, braised overnight with spices and then flame grilled. They'll then serve that tender meat in a bun – as the Lamb Raan Bun – with Dishoom slaw and Sali crisps. God - that sounds good!

Dishoom Shoreditch’s Permit Room bar menu will serve Juleps, Sours, Fizzes, Flips and Punches overlooking the courtyard which will have covered awnings and seat up to 40 people. It'll also be the place to try Dishoom's own newly-launched India Pale Ale, created by the Beavertown Brewery in East London, just minutes from Dishoom Shoreditch.

Dishoom Shoreditch will be open for their 'Soft Launch' from 8th October for breakfast, lunch and dinner offering 50% off food and drink before officially opening on 19th October. Reservations can be made for breakfast and lunch and parties of 6 or more for dinner. To book, call 020 7420 9324.