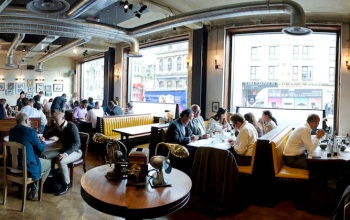 With the sweltering weather we've been having, we're slightly in awe of anyone who's been fasting for Ramadan. Actually we're pretty amazed at anyone having the willpower to stay off food and drink for most of the day, particularly on a long, hot summer's day. And we're not the only ones. Just the other day Will from Hawksmoor tweeted; "Massive respect to all the Hawksmoor staff, especially the chefs, doing Ramadan."

So it's nice to be able to bring our Muslim readers news of an offer that should gladden their hearts. It comes courtesy of restaurant mini-chain Dishoom who are putting on something special for Ramadan.

Both their restaurants - in Covent Garden and in Shoreditch will be offering guests having dinner the sweet dates which are apparently the traditional way for Muslims to break their fast during the holy month. And from next week they'll also feature the slow cooked lamb stew Nihari as a takeaway dish so it can be eaten as a substantial breakfast before dawn the next day.

Nihari will be available from 24th July at both Dishooms.