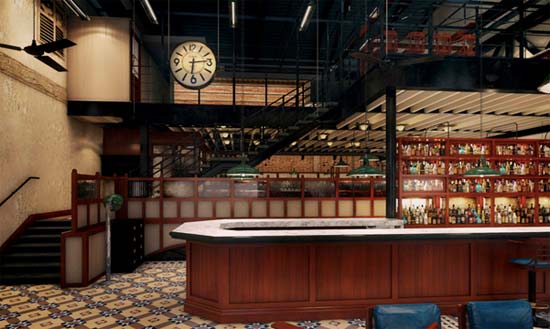 Updated 5/11 with soft launch details. Dishoom's existing Bombay Cafés in Covent Garden and Shoreditch have already been big hits. Now they're joining an ever-growing number of restaurants which are making King's Cross their new home.

What you need to know about the new Dishoom

They're taking the location and making it part of the restaurant. Something that Dishoom have done for their previous restaurants is essentially to create a backstory, and this latest is no different. As the new restaurant takes the space of an old (and huge) transit shed, they're referring to the new place as a "Godown" - an old Indian word meaning warehouse. This time their story is about a man starting a small business in Bobmay's Victoria Terminus station and slowly expanding to this huge Dishoom Godown.

There's a basement bar called the Permit Room. Here you can expect a fine cocktail from “daru-wallah” ("drinks-person") who recently came top at the YBFs because of the drinks he'll be offering at King's Cross (more on that below). And they're offering beer on tap for the first time from London Fields Brewery.

Expect a similar menu to the other Dishooms. So that means an all day menu starting with bacon naan rolls in the morning and more rolls later in the day along with biryani, rajima-chawal, grilled chops, prawns and kebabs and plenty of small plates alongside those. There will be chai tea for the afternoon too.

More on Dishoom King's Cross from the source...

We caught up with Shamil amd Kavi Thakrar, Dishoom's co-owners to find out more...

What can we expect from the King's Cross Dishoom?

It’ll certainly feel a bit different to the other Dishooms - we invariably like to look at things afresh. We like to dig into a completely different part or period of Bombay and bring that alive.

We’re moving into a very interesting Victorian industrial building in King's Cross - it's a historically important fragment of London. That very much drove our thinking. We took our designers, Macaulay Sinclair, with us to Bombay, and spent many days visiting the remaining Irani cafés, researching late 19th/early 20th century history, and understanding the design and architecture of some of the places that are still intact that would have set the tone for early 20th century Bombay, like the Western Railway Offices, the Willingdon and Ripon Clubs, and of course, the railway stations themselves.

We also spent a lot of time sourcing exactly the right furniture from the period and bringing it back with us to use in the site. That period of Bombay history is very rich - it was a very rewarding process.

Food-wise, the menu will be our regular breakfast and all-day menu, with one 'King’s Cross special' - which - like the Lamb Raan at Shoreditch and the Haleem at Covent Garden, will be very traditional and very special.

We’ll have new cocktails created by our daru-walla Carl Brown, who has also been doing a lot of historical research. In fact, he recently won the Young British Foodie award in the alcohol category a few weeks ago with these very drinks. The recipes call for ageing in bottles or casks, and the drinks are then served over hand-chipped ice by the ‘peg’ - which is a traditional Indian liquor measure.

How does it compare in size to the other Dishooms?

It is certainly the largest - quite a lot larger than anything we've done before. We're occupying a section of the old Western Transit Shed (once an interchange for vast quantities of goods via road, rail and canal). Within that, we're taking over The Stables unit which used to house the draft horses that pulled the canal boats.

How do you feel about your place in the reconstruction of King's Cross?

King’s Cross is perfect for us - we feel very privileged to be opening there in this kind of space. We love what’s going on in the area - the thoughtful restoration of iconic old buildings, the sense of history, the shared spaces, the focus on arts and culture, and the social initiatives. It’s very much in tune with the way we feel about London.

Over recent years, London's prosperity has increased (and will continue to increase) and this wealth has bought a lot of exclusive new spaces. However, for a city to truly thrive, we need shared democratic spaces such as King's Cross in which all kinds of people of can mingle, stroll and see free art and play in the fountains and - if they like - have a bite to eat in a nice comfortable place that doesn’t cost the earth and isn’t booked up for months in advance. We're really hoping that Dishoom King’s Cross will feel like a natural and welcome addition to the area.

Dishoom King's Cross opens fully on 7th November right next to Granary Square at Stable Street, London N1C. They're opening with a soft launch offer: There'll be 50% off food and drink from 5pm on Friday 7th November to 3pm on Wednesday 19th November. They won't be taking reservations during the soft launch, so it's walk-ins only. Full details here. For more information, follow Dishoom on Twitter.