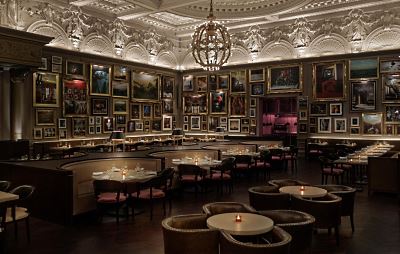 Jason Atherton's had a busy old year so far and now we've got more details of his next venture - opening next month. As revealed earlier, he's in charge of the restaurant Berners Tavern at Edition, Ian Schrager's new hotel in Fitzrovia.

The new all-day 140 seater restaurant, although attached to the new hotel, will have its own entrance on Berners Street with Phil Carmichael taking charge in the kitchen (he's worked with Atherton for ten years, most recently at Pollen Street Social and Little Social).

According to Atherton, the contemporary British menu "will be simple yet elegant, using the best of British ingredients and change of seasons."  Dishes that have been revealed so far are Orkney scallop Carpaccio served with avocado, radish, jalapeño and lime; chargrilled quail served with Alsace bacon, smoked tomato jam, shallot and parsley; and grass fed Baccleuch estate cuts of beef cooked on a charcoal grill. There will also be special "fish Friday’s" and Sunday roast on the menu too.

As for the restaurant itself, it's apparently "inspired by the classic muted colours of Johannes Vermeer paintings and American artist Donald Judd" and a cross between modern and period design. Banquettes are "covered in chestnut mohair and taupe leathe" and there are two large custom bronze chandeliers that are based on the ones at Grand Central Station. There's also a private dining room that seats 14 too.

And if you still need more after all that, there are more available in the EDITION's Punch Room with various punches available for up to eight including their in-house punch (Tanqueray gin, lemon juice, oak moss syrup, orange blossom water, jasmine tea) alongside sliders and bites.

Berners Tavern at EDITION opens on September 12 on Berners Street, London W1A. To find out more, follw them @EDITIONhotels.