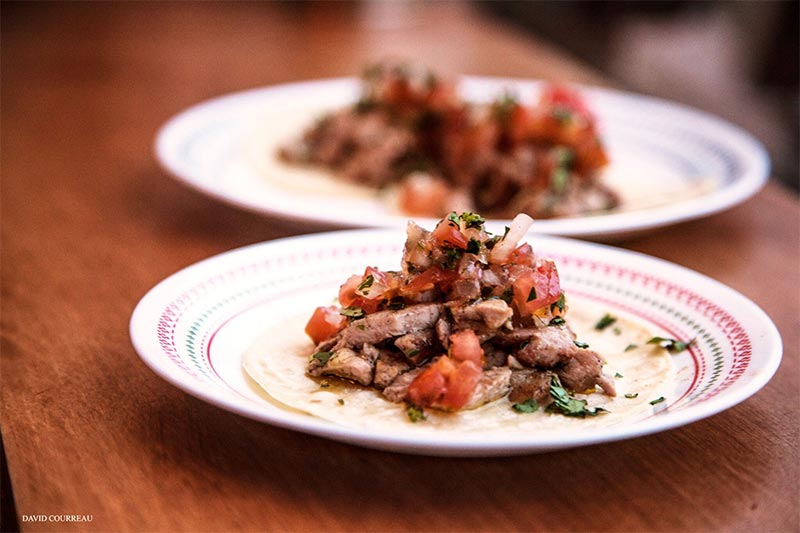 In a nutshell: Tacos, beers and margaritas with a neighbourhood vibe

Summing it all up: Lower Clapton Road is the home of a new taqueria, as the taco trend spreads north east in London. Mexican food fans will be able to try pork pibil, while veggies can get stuck into a jackfruit taco, with cucumber margaritas and micheladas to wash it all down.

Looks like tacos are most definitely having their moment in the spotlight this year (something we predicted in our trends for the year), especially now that Del 74 has gotten off to a fine start. It opened earlier this year, but we're only catching up with it now.

The new no-frills taqueria, which has opened on Lower Clapton Road, comes from chefs Enrique Vivas, and Jorge Felizardo (who launched Taberna Mercado with Nuno Mendes). Their aim to “keep it simple, keep real” which they’ll be doing by the virtue of a super short menu: just tacos, beer and those all important margaritas. “With a super-tight menu and a small selection of drinks, we can make sure that everything is great," they said.

Taco fillings will be traditional, and include sauteed tilapia with homemade salsa, barbacoa with slow cooked leg of lamb with coriander, and one for the veggies made with sweet potato and jackfruit, a curiously meat-like fruit that grows in tropical regions.

They’re rather proud of their cochinita pibil taco, which pairs braised leg of pork with guacamole and red pickled onions. “Cochinita pibil is the hardest one to nail. Ours is a really beautiful, really authentic one, Tabasco-style,” they said, referring to the Tabasco-region of Mexico.

You’ll also be able to get watermelon and cucumber margaritas (which is enough to put it on our to-go list immediately) with homemade syrup and for the hardier drinkers among you, micheladas - sour beer cocktails full of lime and spices.