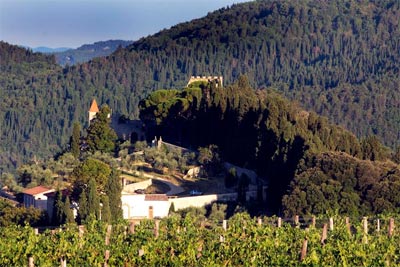 The Frescobaldi family are apparently "one of Italy’s oldest and most respected wine dynasties and now they’re opening a British outpost of their popular Dei Frescobaldi restaurants.

What you need to know about Ristorante Frescobaldi

The Frescobaldi family have been making wine since 1308 so they've got some experience in these matters, first trading wine for works of art with Michelangelo and were the major financiers to the kings of England, with Henry VIII personally signing their receipts. This latest restaurant is their first joint venture between the Frescobaldis and Good Food Society, from Levent Büyükuğur. He founded the Istanbul Doors restaurant group which has over 40 restaurants in Turkey, the UK, Russia and Azerbaijan.

This is their first UK standalone restaurant, but if you've heard the name before, it's because they do also have a restaurant on the lower ground floor of Harrods. They also have outposts in Florence and at Rome’s Fiumicino airport.

The food will "celebrate Tuscany’s rich gastronomic tradition, but with their own contemporary twist".  So expect dishes like Florentine bread and tomatoes stew with stracchino and basil cream; Leg of Guinea Fowl with asparagus and lemongrass stuffing, served with carrots and curry puree and well as veal rolls stuffed with tuscan ham and zucchini with sauteed swiss chard

And of course - wine plays a big part. The main focus is on the wines produced by Marchesi dei Frescobaldi, which has nine estates (predominantly in the hills around Florence and Siena - that's a pic above) including from Mormoreto, a single-vineyard cru of Castello di Nipozzano, through to the flagship Frescobaldi cuvée, Brunello di Montalcino Castelgiocondo Riserva.