David Chang says he has no plans to open in London 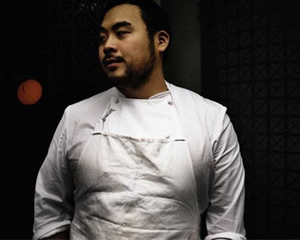 When Hot Dinners bumped into momofuku's David Chang at the launch party for Taste of London this week, there was really only one question we wanted the answer to: when was he opening up in London?

Sadly for us, the answer wasn't what we were hoping for. "I've got no plans for London," Chang told us. "I'm really busy with New York, Sydney and Toronto, so I'm focusing on those."

But there was a glimmer of hope: "The thing is no-one's ever asked me to do something," the chef added. Could that be a 'in' for London? Maybe there's a hotelier out there who could put feelers out. After all, that's what happened in Toronto where Chang's opening a three-floored restaurant as part of a new Shangri-La development. Hold on. Isn't there a Shangri-La opening up in the Shard in Spring 2013?

While we leave that to you to muse over, we're heading over to the St John Hotel tonight for one of Chang's dinners he's hosting while he's over in London. If you couldn't get a seat (and let's face it, at £100 it was pricey) we'll be tormenting you with pictures on Twitter  and Facebook later.