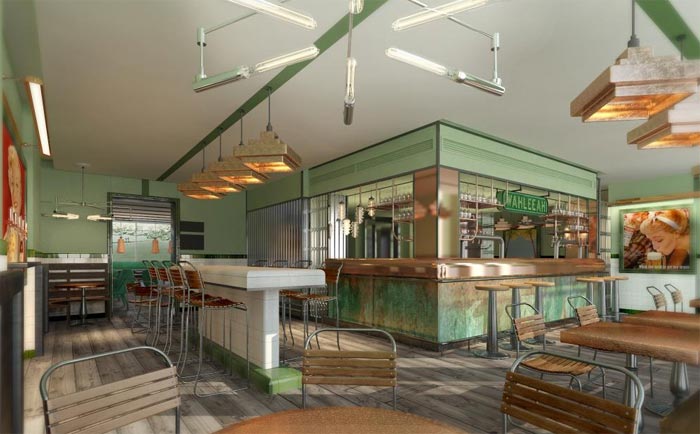 Dave Ahern - aka CorkGourmetGuy aka BurgerBreakout - is about to open his first restaurant called Wahleeah following a series of successful residencies.

That menu sounds, quite frankly, fantastic and there's a strong focus on beer. It includes:

You can see more of the menu here. We caught up with Dave to find out more...

Why did you develop Wahleeah?

I've been in London now for 4 years, pretty much exactly as long as I have been a chef, and in that time I have always wished that I could afford to live in the center of London where I had so much choice and diversity in places to eat available on my doorstep. To me London is the food capital of the world but when you leave that central hive of creativity and move out into the suburbs, with a few exceptions, you leave that buzz behind you.

Suburban neighbourhoods in London seem to have the same uninspired choices of big chain restaurants, generic cafe /bistro fare or local ethnic food offerings that makes it look like every high street has worked of the same paint by numbers approach to eateries. This gives people with a big interest in food a choice between eating at a new trendy exciting venue followed by a long trek home across London afterwards or settling for something closer to home for the sake of convenience. To me that is a shame.

I love local restaurants. They should be at the very center of a community and they should define an area and give it a sense of identity. They should encourage people to spend their off time hanging out and meeting other people from the same neighbourhood. Not because people don't want a late night schlep from the other side of London but because they offer great food and a great time right closer to home - that's where the idea for Wahleeah came from.

And how about that name?

The name comes from the phonetic spelling of an old Brooklyn slang term "wallear" which means to have a craving that can only be fixed by a certain kind of food. We picked the name because Brooklyn's food scene was a big part of the inspiration for the restaurant. Brooklyn is an area where chefs are constantly pushing the boundries of neighbourhood food, they are refusing to simply play it safe and if you look at our menu you can see that philosophy carries right through it.

I showed the first draft of the menu to some friends and one replied "I love it but isn't a bit risky to do this in suburban London?" The answer is "yes", but giving up a job as a management consultant to become a commis chef at 35 kind of shows you that I'm not afraid of risks. Luckily both of my investors, Rudy and Bas, are accountants so they do the worrying about the risks and I can get on with the cooking.

Probably the thing that is most different is the lengths we will go to to make everything from scratch. We will be making our salt, our own flour, our own cheese as well as all of our sauces. We will even be making our own bacon and other smoked meats. I have only ever added something to a dish that I didn't make myself if it was better than the best I could make.

Take our turkey burger as an example - that will be topped with a black garlic cheese. It may be an all day process to make the black garlic cheese, which is a small part of the overall burger. But if nothing tastes better then I'm going to spend a whole day making that cheese just to put a slice on top of a burger. We will never design a dish with the thought of "what is the best thing that's available to use on this dish" but rather "what is the best thing that we could possibly use in this dish". If it doesn't exist then we will just have to figure our a way to make it.

It's that kind of thinking that finds me in my kitchen at 3am trying to figure out how the hell I make anchovies into salt!

The menu has a strong focus on cooking with beer, which is something I have always enjoyed, and that beer focus will carry through to the drinks offering which will incorporate 30-40 beers from both local and international breweries. We've brought in Phil Harding from Boutique Beer Brands to help us put the beer list together and to give us a nice mix of local beers along with some US, European and Asian beers and this beer selection will play a big part in shaping the menu as we move forward. If we find a beer we like then we can look to develop a dish that works well along side it or ideally one that we use the beer in the cooking of the dish.

We've sort of thrown the wine list out the window on this. we will be offering a very small choice of one red, one white and one rose using a new "by the glass system". While the wine will be of very good quality, it is not going to be a big focus for us.

It is my belief that British food tastes developed along side British tastes for beer and not wine. I also feel that it is easier to match a beer to an individual plate of food than it is to match a bottle of wine to a whole table of different dishes.

Wahleeah opens in Fulham at 18 Farm Lane Fulham, London SW6 1PP on 29 August. For more information, follow them on Twitter @WahleeahSW6 or Dave at @CorkGourmetGuy.