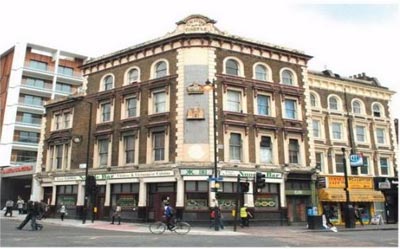 It may more usually be the area of London most closely associated with facial hair and restaurant playlists, but it seems that Dalston has finally come of age with the announcement of its first fine dining establishment.

Des Pantalons Rouges, which is currently under wraps on Kingsland Road, is pitching itself as a restaurant to rival Mayfair spots with valet parking, Michelin-chasing levels of service and more domes than you can shake a tablecloth at.

Unusually - or should we say daringly - for a restaurant in these here parts, they have also taken steps to ensure their clientele is as far from the usual East London crowd as you can imagine. There will be a strict dress code - jacket and ties and no 'sports shoes' for gentlemen and photography at the table is only allowed "with written permission of the restaurant".

"We think there's a real market in this part of town for proper food that doesn't come in a paper bag or that's been designed to eat with your hands," says owner Silvan Rodspoi who currently owns two restaurants in Kensington and one across the Channel in Paris. "And if something does require you to use your fingers, we'll be providing you with a finger bowl!"

Des Pantalons Rouges will be opening at 600 Kingland Road with soft launch dinners operating from 1 April.

[Updated 12pm - yes, you guessed it, this was our April Fool]
0
Shares