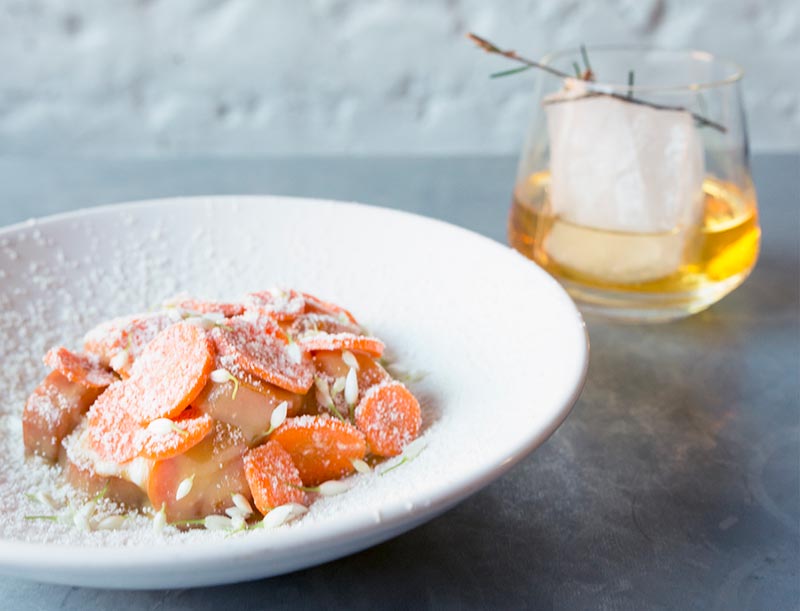 In a nutshell: Experimental dishes and drinks from the cocktail king

Summing it all up: “We want to keep pushing boundaries,” said Mr Lyan about his new concept bar and restaurant. No problem there then - his new restaurant uses very (and we do mean *very*) creative ingredients in a special all-in-one kitchen and bar, reducing waste and keeping guests on their toes. Expect ambergris, Japanese knotweed and smoked compost carrot on the weekly changing menu.

Right now, the no/low waste trend has never been bigger. Internationally acclaimed mixologist Mr Lyan (Ryan Chetiyawardana) has long been a supporter and has just announced a new restaurant and bar concept inspired by the movement with some tremendously weird ingredients.

Cub, which will be run in association with Doug McMaster, the man behind Brighton’s zero waste restaurant Silo, will be all about bringing you fine, creative dining in a high luxury environment with a low waste result.

The team have gone for a suitably off-piste approach to the kitchen and the bar, bringing the two together in a single shallow counter bar that’ll span the restaurant, so that the booze and the food can share ingredients more efficiently. It's all about knocking down the barriers between the chef and bartender roles - presumably with the idea that it’ll bring down the waste factor even more.

Fans of Mr Lyan, and there are many of you, can rest assured that we’ve been told the cocktail king has no intention of stepping away from his “heaps mad shit” approach to presentation.

The menu’s got plenty of options depending on your appetite whether you’re there mainly for the drinks - so there’ll be snacks and appetisers, plates that have accompanying drinks and plates that don’t. If you don’t want to go a la carte, try the tasting menu with three plates, four drinks, and “off-menu tastes and snacks”. Based on Lyan’s track record, we’ve got every confidence that it’ll be a rip-roaring success.

Some of the bonkers-sounding dishes and drinks we’ve been told to expect include:

Other ingredients that we’re still getting our head around include compost smoked carrot, ambergris and precipitation of Lapsang Tannin. The menu will change weekly with new ingredients and methods as well, so it'll be interesting to see what else he comes up with.

On the launch of Cub, Ryan said: “We want to keep pushing boundaries (and keep things weird!), but in a way that feels accessible and honest as well as exciting and modern.”

No problem there then.