Courvoisier roof terrace opens at Harvey Nichols for the summer 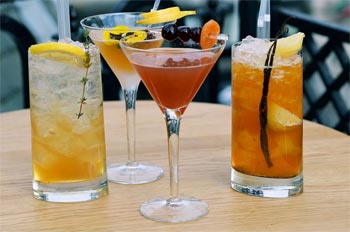 With the warm weather finally here, a whole host of rooftop bars are getting ready to open their, er, roofs to thirsty Londoners. Last week, we reported on Dalston Roof Park which has just re-opened for the summer but if Astroturf and deckchairs don’t quite do it for you, then perhaps Harvey Nichols holds the answer to your outdoor drinking needs.

From 20 May to 18 August, Courvoisier will be setting up shop on the department store’s Fifth Floor roof terrace, serving bespoke cocktails and paired food packages. Among the creations on offer will be the Courvoisier Collins – Courvoisier Exclusif with pressed lemon, wild thyme syrup, orange blossom water and soda water – and the Exclusif Punch, made with black tea, violet, vanilla pods and preserved lemon, served in a copper punch bowl.

Courvoisier are also hoping to bring a slice of Jarnac (the area Courvoisier is produced in) to Knightsbridge and will be redesigning the terrace in keeping with the regions style and ‘aromas’ apparently.