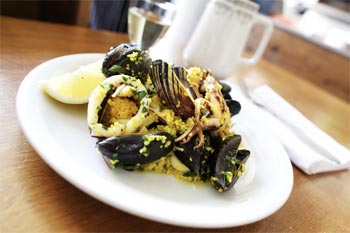 The folk behind East London's Lardo are about to open a sibling restaurant right around the corner. Coppa Bar & BBQ can be found on the rooftop of Émigré Studios, serving up antipasti, fritte and barbecue courtesy of Executive Chef, Damian Currie's menu. But this isn't some tiny roof gathering - it'll actually have room for 200 people, making it one of the biggest open-air dining rooms in London.

If you're stuck in town over the summer, here's where you can make like you're on holiday. There'll be deckchairs and an open air cocktail bar. But that's not all folks, Coppa will also have a cart down in London Fields itself. The cart will offer freshly shaved granita drizzled in Coppa's home made cordials, hotdogs by Native Breeds, spiedini (Italian skewers) and - heaven - an icecream sandwich made with gelupo’s gelato. The cart will also sell UK regional cheeses, salamis and olives for people to take back to their own picnic rugs.

Bookings are now open on 020 8985 2683 for the Bar & BBQ which officially opens the weekend of the 24th of May, although their Facebook page says they're soft opening this weekend and to email them at info@lardo.co.uk for more details. It'll be open for business every weekend, Friday from 5pm and Saturday & Sundays from 12pm and will run until late September. You can find the entrance to the Hothouse Rooftop via Martello Street, London E8 3QW.

The Coppa cart will be in London Fields every day from 8am – 8pm during the summer from 24 May.