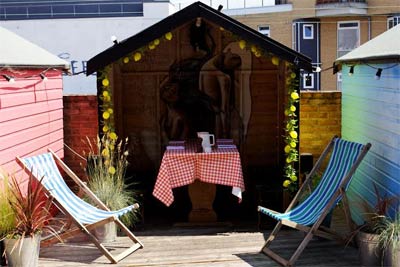 Coppa, the rooftop restaurant by the people behind Lardo was a big hit last summer, so it's great news to hear that it's returning next month.

They'll be housed on the roof of the Hothouse building overlooking London Fields and will be seating 200 people - therefore becoming one of the largest open-air dining rooms in London. It'll serve a southern Italian inspired menu from Head Chef Christian Angius (Previously at L’anima, and Lardo)

His brunch menu will include Lardo’s charcuterie made from the rare breed Mangalitza pig alongside a selection of antipasti such as Fennel and Orange salad, Panzanella, Insalata Genovese and Patatine Fritte. They will also have “Rosticceria” from the BBQ - free-range chicken served either ‘Nduja-marinated or seasoned with rosemary & lemon with a choice of salad.

Coppa opens on May 24 2014 at Hothouse Rooftop (enter Via Martello St) E8 3QW. Opening times are Friday from 5pm, Saturday and Sundays from 12pm. They'll be taking reservations at reservations@coppalondon.co.uk from May 12. For more information, follow them on Twitter.