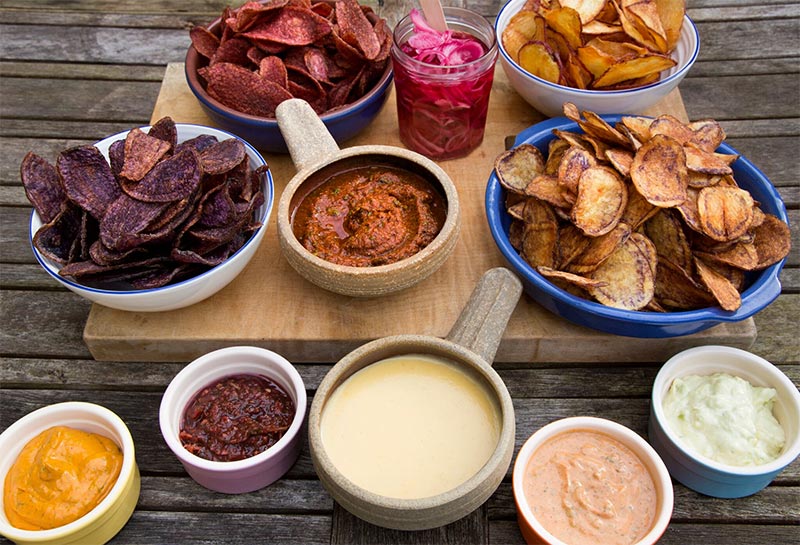 First, there was Bubble Dogs. Then, there was Cereal Killers. And now, arriving on Old Compton Street this autumn comes Hipchips, taking pairings back to their most basic - chips and dip. Also, everything is served on a conveyer belt (for some reason.)

London’s voyage towards peak hipster is still going strong with the arrival of yet surprising dining concept, this time based on posh crisps and stuff to put on the posh crisps. Perfect for those who want to bring their secret obsession with Walker’s sweet chilli out into the open.

The crisps will be ‘hand-crafted’ from fresh, and fried up in front of diners, who’ll be able to pick which type of spud they prefer from a selection of five heritage types, grown in the north of England.

From there, you’ll pick your dip. But don’t expect your options to include mild, medium or hot. Head chef Scott Davis, from Fifty St James, has distilled a range of international flavours into little bowls of crisp-friendly dip, including katsu curry, baba ghanoush, Moroccan yoghurt, and pickled onion fondue. Mix and match is definitely the way to go here.

If you’ve ever dipped your fries into a milkshake, you’ll be in safe hands for dessert as well. There’ll be sweet varieties of crisps on offer, dusted with cinnamon sugar doughnut-style. and served with pudding dips including rhubarb and custard, s’mores and chocolate and salted caramel. All dips available from £4.50.

Based in the heart of Soho, Hipchips is in the perfect location for those who fancy something a bit different after a West End show, or want a post-pub snack that’s oily and salty. And also served on a conveyer belt.