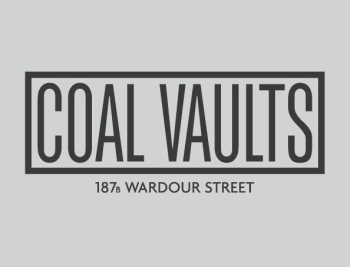 Tucked under the streets of Soho, Coal Vaults opening in September is a basement cocktail bar/restaurant. It's a collaboration between chef James Knox Boothman (previous at Grub at the Bethnal Green Working Men's Club), menu consultant Magnus Reid of Rooftop Café in Borough and owners Martyn ‘Simo’ Simpson and Felix Leuschner.

"This is a project with endless opportunity," James told us. "Our pre-booked vaults for intimate, discreet parties and feasting dinners in the main space. It's a case of doing everything you do to the highest standard – making your own bread, preserves, infusing your own drinks, fusing food and drink together."

Jerome Slesinski will be in charge of the drinks menu. "Cocktails will be interesting, seasonal where appropriate" co-owner Martyn ‘Simo’ Simpson tells us. "What will distinguish Coal Vaults is that we’ll be matching our cocktails to dishes. We want to promote cocktail-heavy dining and the drinks will have as much creativity as James’ menu. The idea is to give the best quality cocktails without the attitude of the cocktail bartender.

"The name comes from the time that the five vault space was originally used for storing coal."Years down the line, it was converted into a club/bar originally called The Dog House, and later Bordello. Then the triads took it over to their needs, after which the Koreans took it over and made it into a restaurant. We have restored it to its former glory, playing on the original look of the place back when it was used for storing coal."

Update: Coal Vaults is opening for lunch from tomorrow and we've got the exclusive details of the soft launch offer. N

ew lunch items include Roast English Squash and Pine Soup with a Soft Boiled Quail Egg (£5) and Pulled Rabbit, Sweetcorn relish and Chilli Jam Sandwich (£5.50) and a range of new drinks including Hot Buttered Tea and Home Made Lemonade. For the first two days (23-24 October) they'll be offering 50% off the food bill. Lunch is served from 12-3pm.