Written by Catherine Hanly
Created: 12 May 2015 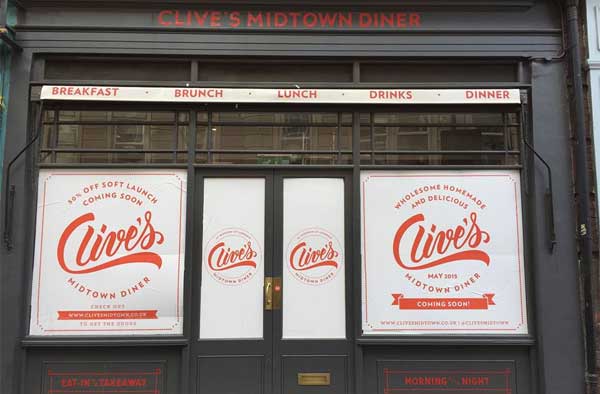 Opening this month, close to the British Museum is Clive’s Midtown Diner. It's the first restaurant by chef Toby Aldenhoven who previously worked for Will Ricker at Bodega Negra and Casa Negra. Toby describes it as "an American diner inspired by my childhood in Massachusetts".

The 30-seat all day diner will open for breakfast, lunch and dinner, serving drinks and bar snacks in the afternoon. There'll be a weekend brunch and takeaways are also going to be available.

As for the menu, expect the usual diner classics like clam chowder and fried clams, with a few updates:

To drink there'll be beers from Camden and Meantime, soft drinks from Dalston Cola and a range of shakes and floats.

Clive's Midtown Diner will open on Friday 29 May at 49 Museum Street, London WC1A 1LY. They'll be running a soft launch offer 50% off food from Thursday 21st May. Opening hours will be Monday to Friday 8am – 10pm and Saturday 9am – 10pm. Keep up with their news on Twitter @clivesmidtown