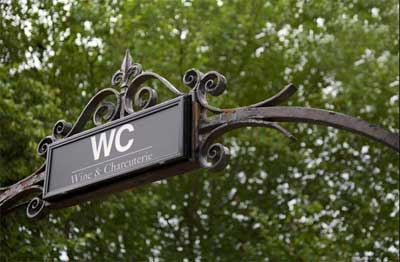 An old public convenience gets a see-what-they-did there rebrand as WC serving up wine and meat to Clapham residents.

Here's what you need to know about WC

It's a labour of love by locals - two determined locals Andy Bell and Jayke Mangion have worked for nearly two years to save this derelict, 100 year old listed former public convenience. Everything that could be salvaged was including love letters tucked between the tiles by some of the venue’s “previous guests” - you'll find those now in the wine bar's toilets.

Most of it's underground - underneath Clapham the space now seats just 40. There's a small bar area and three booths with tables. There's also a large outdoor area at street level on the island of Clapham Common tube, with seating for a further 40 people.

All wines will be available by the glass - the list is small but regularly updated. But there'll also be draft beer from Brixton Brewery and a cocktail list. To soak up the booze - charcuterie boards, breads and cheese will pair the wines.

WC will be open from 6pm on Friday 11 July at The Pavement, Clapham Common, Clapham, SW4 7AA. It'll be open seven days a week from 6pm til late and 12 noon til late on Sat & Sun. Keep up with their news on Twitter @WC_Clapham