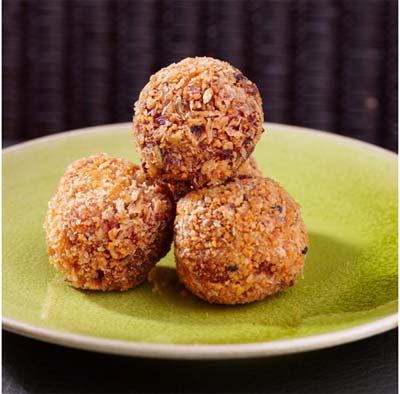 Want to try something a little more eggs-otic this Easter (apologies)? Cinnamon Soho are launching an Easter Egg inspired menu, which is set to be a cracking take on the typically chocolate orientated holiday.

Vivek Singh and his team at the restaurant famously revolutionised the iconic Scotch egg, into a spice-infused Bengali treat the “Bangla Scotch Egg”. Head chef Ramachandran Raju’s menu will mix sweet and savoury flavours aiming to turn the notion of the traditional Easter Egg on its head.

Speaking to Hot Dinners, Vivek said: "The immediate popularity of the Indian-inspired balls at Cinnamon Soho has made the BALLS! section the most popular on the menu, and possibly the most fun to eat and share. While thinking about the menu for the Easter, we came up with the idea of creating a menu fully inspired by them – with the ever-popular Bangla Scotch Egg providing a play on the traditional Easter egg. The all-ball, egg-inspired easter menu is fun and playful, two values that Cinnamon Soho has come to stand for.”

The menu will include spherical delights of the crab and cod variety, Fisherman’s-style crisp shrimp, and spiced mango and pistachio kulfi with ‘dum’ cooked vermicelli.

For £30 per person, diners can have a three-course egg menu, with a complimentary “Easter Egg Flip” cocktail (cognac, tawny port, Baileys, sugar and egg white, garnished with grated nutmeg), and a selection of sharing appetisers. Hatching just in time to celebrate the long bank holiday Easter weekend, the egg-inspired menu runs from Friday, 29th March to Monday, 1st April.

Find out more about Cinnamon Soho