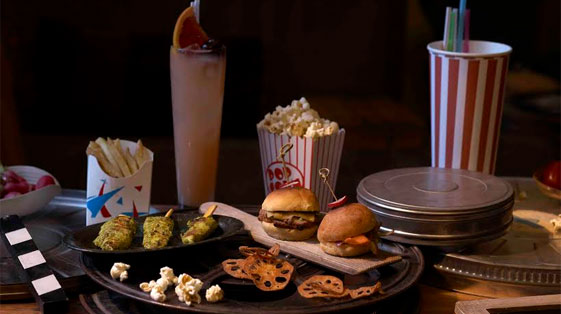 This sweet snack tray is the food offering at Cinnamon Kitchen's summer cinema outing in the City. The Devonshire Square restaurant has teamed up with Picture House for some alfresco summer screenings on its terrace.

On 20th July they'll be showing The Lunch Box, a romantic comedy set in Mumbai. On 3rd August it'll be Wes Anderson's The Darjeeling Limited.

Turn up from from 8.30pm for a Picturehouse Punch cocktail and in the hour before the film starts at 9.30pm everyone gets their own snack tray with a beef or paneer chilli dog, spicy potato bonda balls and sweet thandi popcorn.

Tickets are £35 per person, which includes the film ticket, welcome cocktail, and food. To reserve your place for either evening please email info@cinnamon-kitchen.com.