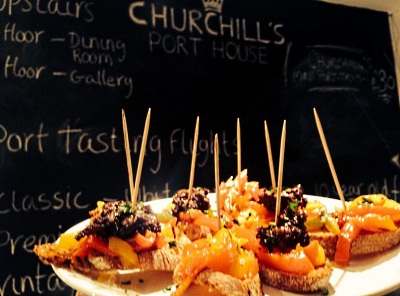 If you've been down Greek Street recently and wondered what the Churchill port house is that's popped up at no 26, then let us enlighten you.

It's a three floor temporary educational experience and bar by Churchill's port where visitors can learn about different styles of port through regular tastings led by the winemaker and founder of Churchill's, John Graham.

For a few months they'll be serving up Douro wines and Ports, accompanied by a selection of specially chosen tapas dishes designed by chef Xavi Meroño.Ports will include wood ports such as Churchill’s White Port, 10 and 20 year old tawnies, bottle aged ports such as the LBV, Crusted, as well as Single Quinta Vintage and Vintage. You'll also be able to try their Douro table wines.

If you're looking for a last minute office party venue (having exhausted our other Christmas party ideas) the first floor dining room here can be booked for private functions. But they'll be hoping you leave here with the firm idea that port is for more occasions than just Christmas.

Churchill's Port House is at 26, Greek Street, Soho until February. For more info follow them on Twitter @port_house