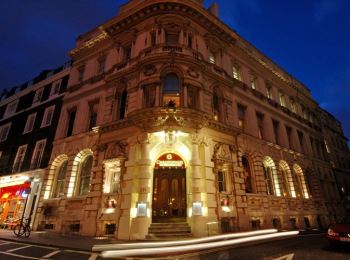 It's been closed now for almost four months, but when it reopens, Covent Garden's Christopher's will have a new look menu as well as a fresh new interior.

Downstairs in the Martini Bar, there's a new drinks list mixing classic Martinis with more creative concoctions such as a New York Tart Martini and a Chocolate Cherry Mochatini as well as cocktails using homemade infusions. A bar food menu will be available all day, offering casual dining with options from snacks and sharing plates through to more substantial dishes including Po' Boys and Clubs, Burgers and Salads. All-day desserts will include a peanut butter, jelly and chocolate sandwich; and cinnamon beignets with chocolate dipping sauce. There'll be a communal table as well as reservable seats too.

Upstairs, the Dining Room menu features a raw bar section with fresh ceviches and tartares. Certain classics remain, such as USDA prime steaks alongside some new dishes such as Missouri-rubbed rack of lamb with Boston beans, and blackened salmon with jambalaya risotto.

The popular weekend brunch returns with some new lighter dishes - such as grilled grapefruit and banana, muscovado, toasted coconut flakes, spiced rum - as well as corned beef hash with béarnaise sauce and the lobster club with chilli mayo. Some of the restaurant's signature brunch dishes are still on there - including steak and eggs, and eggs Maryland.

Christopher's reopens on the 16th but they are now taking advance bookings. To book call 020 7240 4222 or email reservations@christophersgrill.com For more information follow them @ChristophersWC2