[SIGPLUS_EXCEPTION_SOURCE] Image source is expected to be a full URL or a path relative to the image base folder specified in the back-end but /blog/2014/xmasspecials/gallery is neither a URL nor a relative path to an existing file or folder.
0
Shares

If you need yet more reasons to get excited about the festive season approaching, then the arrival of Christmas specials ought to do it. From the Pret Christmas sandwich to the Byron Holy Cheesemas, we've gathered together the food harbingers of Christmas. Who needs a John Lewis advert when you have these? 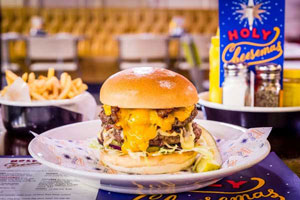 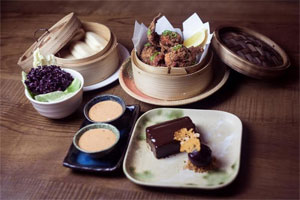 Flesh & Buns are running with their take on the party bucket for Christmas, the Japanese Fried Chicken (JFC) Festive Feasting Basket. The set menu for two is £37.00 and includes Rum & Raspberry Milkshake, 1/2 Buttermilk-fried Chicken with Shichimi and BBQ Mayonnaise finishing off with a Chocolate Yamazaki Cake. It'll be available from 8th – 31st December. 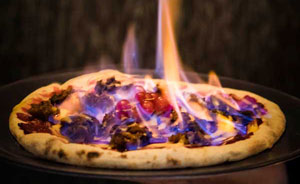 The Mayfair Pizza Company on Lancashire Court has a range of pizzas on for Christmas including the Christmas Pudding Pizza (£7) made with Christmas pudding, custard brandy and redcurrant compote and which they'll flame before it comes to the table. All go on sale from dinner on Friday 14th November 2014 onwards. 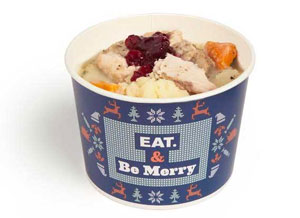 Alternatively you can opt for the Festive Full Works Bloomer (£3.65) featuring sliced turkey with smoked ham and pork and sage stuffing, cranberry sauce, mayonnaise and spinach on multi-seed bread. 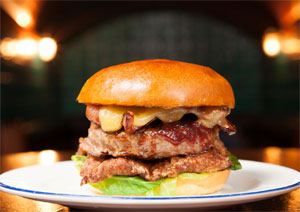 Hawksmoor are bringing back their Christmas burger once more. They're also putting on a festive nugget made with buttermilk fried turkey thigh, Ginger pigs in blankets (Ginger Pig sausage patty and bacon) wrapped around a melting cheese sauce core and Paxo crumb and served with cranberry ketchup.

All items go on sale Monday 24 November at the Hawksmoor Spitalfields Bar. 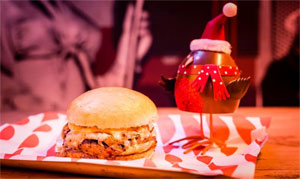 MEATliquor and the other MEAT restaurants are getting on on the Christmas specials act for the first time this year and they've three specials which have just come on the menu.

First there's the the XXXmas burger, a sausage and stuffing patty, topped with roasted turkey, crispy bacon, a drizzle of cranberry sauce and gravy. Then there's the XXXmas Dog, draped in turkey slices, cranberry coulis and sprinkled with crispy stuffing. And finally, Xmac & Cheese, deep fried miniature logs of mac fused together with cheesy Camembert and Stilton, to be dipped in a pot of cranberry and port sauce.

For more about the specials - read our article. 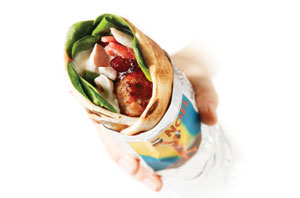 From November 20, Leon are launching "LEON NOEL" with a few new Christmas dishes. There's “The Christmas Special” for seasons eatings - British Turkey from Norfolk & Lincolnshire, wrapped up with pork, sage & onion stuffing balls, roasted bacon, fresh spinach, olive oil mayonnaise and a cranberry & port sauce (4.95) - that's it on the right. Plus there will be seasonal Christmas soups - Celeriac & Stilton, Sweet Potato, Squash & Sage and Spiced Parsnip (3.30) with a portion for the cost dontated to the homeless. 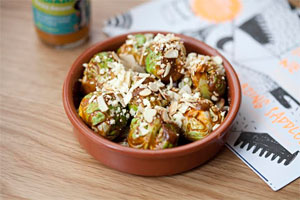 Wahaca have a couple of new specials on the menu now. There are Duck taquitos (£5.25) which are confit of duck leg, rolled in crispy blue corn tortillas, with mole sauce. However, we're more intrigued by the much more Christmassy sautéed sprouts (£3.95) - pan-fried tender Brussel sprouts with a touch of red mole sauce, toasted almonds and feta. 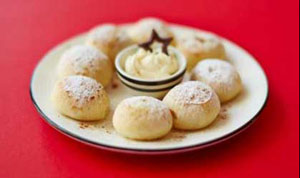 Pizza Express has a few specials going on their menu from 11 November including a Romana Festiva for £13.20 which has a base topped with béchamel, brie, leek, pine kernels, mozzarella, rosemary, sage and garlic oil, finished with fresh rocket and Gran Moravia cheese and served with a ramekin of cranberry sauce.

They're also bringing back their Snowball Dough Balls £4 sprinkled with cinnamon and icing sugar and served with a vanilla cream dip. 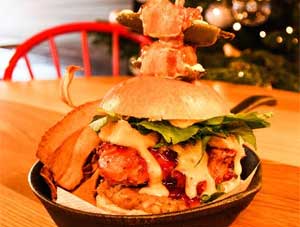 Bird in Shoreditch has a rather impressive Christmas burger (£12) on the menu till 4 January. It consists of crispy fried chicken with a cranberry glaze, sausage stuffing, and panko-crusted deep fried brie, on a soft bun, served with bacon-wrapped pigs in peppers and parsnip crisps.

Those pigs in peppers, should you be interested, are essentially “jalapeno poppers” – hollowed jalapeno peppers filled with paprika cream cheese and a chipolata, wrapped in bacon

Have we missed your favourite Christmas special? Let us know on Twitter.