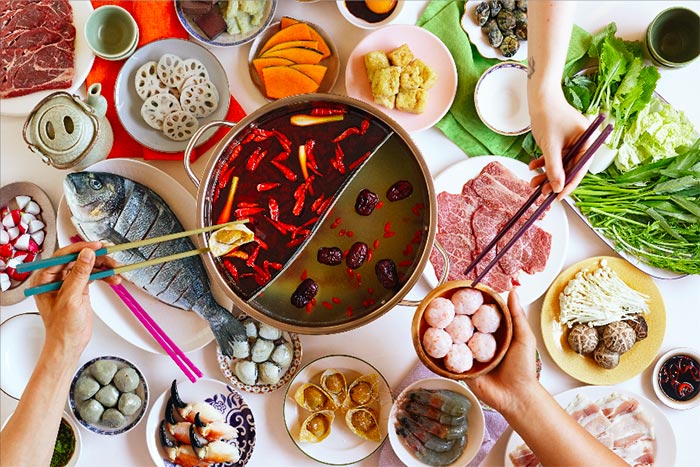 A new restaurant is on the way to London, coming from Fah Sundravorakul, who used to own restaurants in Thailand. He's bringing a hot pot restaurant to Chinatown.

Obviously, expect a big focus on hot pots. That's a pot of stock which will be sunk into the table and used to cook all manner of ingredients.

And there will be several broths to put in that pot. They will be:

As for what you'll be dunking in the broth? It'll all come to you on the conveyor belt that winds its way around the restaurant (with an upstairs restaurant that's more formal). All that food includes: thinly sliced free-range British beef and pork; mixed clams; sea bass Slices; secret recipe beef and chicken balls; pork and crab wontons; Chinese pea shoots and mMustard leaves; turnip leaves and lotus roots; pumpkin slices and Wood’s Ear mushrooms; noodles; rice cakes; fresh oysters (shucked to order); queen scallops; Fish Head of the Day; brown crab claws or pork offal mix. So yes, LOTS of ways to create your own meal.

There will also be some starters before you get to the main event, including Fish and Seaweed Floss, Pomelo Salad with Lap Cheung (a traditional Chinese sausage), Canton’s Orange Squid, Duck and Sour Plum Skewers and Xin Jiang Spiced Ribs. While desserts include Soy Milk Curd topped with lychee granita, whipped cream and mango coolie and Deep Fried Chinese Dough Sticks with flavoured condensed milk and crushed nuts.

As for drinks, alongside papaya milk and bubble tea, there will be a Chinese pineapple beer too.

Shuang Shuang is open now and on soft launch until Boxing Day with 30% off food (except for Christmas Day) at 64 Shaftesbury Avenue, London W1D 6LU. It'll be for walk-ins only. Find out more from them on Twitter @hotpotshuang