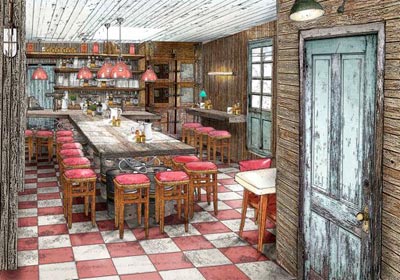 Following on from Vauxhall's Dirty Burger, Soho House are continuing their south of the river ventures and have confirmed that the second Chicken Shop will, as expected, open in Tooting (even though the site was originally reported as a Dirty Burger). Nick Jones is a Wandsworth local, so he's apparently had his eye on the south for a while.

The original Chicken Shop, which opened last year in Kentish Town, was a huge hit and part of a continuing trend (that we're much in favour of) in chicken restaurants opening across London. As with the original, this will be dedicated to their marinated rotisserie chicken, served quartered, halved or whole with either smokey or hot sauces. Sides are crinkle-cut chips, coleslaw, corn on the cob and butter lettuce salad.

Desserts will include deep filled apple pie - where you'll be able to dictate the size of the slice - as well as warm chocolate brownie or lemon cheesecake, all served with either cream or ice cream. There will be takeaway and their picnic hampers will be making an appearance in Tooting too.

It'll be a little bigger than the original, seating 50, and has been designed with a 1950's American general store feel (as the original in Kentish Town is too).