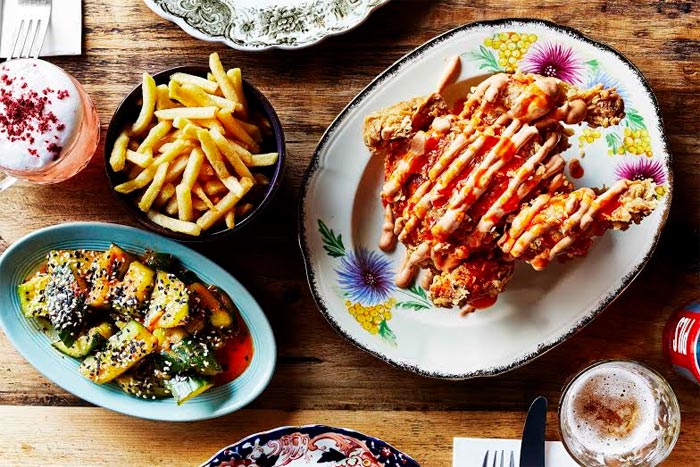 We unashamedly LOVE Chick 'n' Sours. Everything we've had there from the AMAZING Szechuan aubergine dish to the massive deep fried whole chicken hasn't failed to thrill. Our only regret is not making it out to Dalston enough - so we're VERY pleased to reveal the news that a second Chick 'n' Sours is coming to Seven Dials.

Carl Clarke and his business partner David Wolanski are setting up shop on Earlham St (round the corner from Polpo at Ape and Bird). The 40 seater venue will have that Szechuan Aubergine dish as well as the house fry with “seaweed crack” seasoning on the menu. New dishes include Hot & Numbing Disco Wings and XO Pineapple: that's cubes of pineapple together with a sauce made of XO sauce, toban-fermented chilli, Korean ssamjang, lime and peanuts.

There will be Mexinese Nachos. That's a mix of Mexican & Chinese food using corn tortillas for the nachos and a Szechuan ‘ragù’ using minced chicken, smoked bacon, Szechuan pepper and fermented chilli. And on top of that, kimchi flavoured cheese sauce and topped off with spring onions and fermented jalapeños. It sounds AMAZING.

And there's more for vegetarians too. They'll have a bun made up of a large soy-pickled shiitake mushroom and American cheese in crispy coating, Gochujang mayo, Sriracha sour cream and Asian crunchy slaw.

It'll be open seven days a week for lunch and dinner and there will be weekend brunches too, including their Brunch Bun - "fried thigh, gochujang mayo, bacon, fried egg, avocado, Asian slaw, & sriracha sour cream". And the whole fry will be making a weekend appearance too.  AND there will be lunchtime takeaway too. You'll be able to see the kitchen as you walk past, so that's going to be hard to resist.

Expect sours on the drinks list, of course. The House Sour will be feature blackberries and finished with Womersley Farm’s Lavender, Lime & Black Pepper vinegar - and they say they'll keep the drinks at East London prices.

Finally - there's a special party in advance of the opening. On September 6 they're throwing a party for 100 with DJ Yoda on the decks. It's very exclusive - if you're a lucky winner, you'll get a gold Chick n' Sours tattoo which will give you entry to the party at a secret location. Exepct lots of chicken too. To win tickets to that - keep an eye on their website or on Twitter.