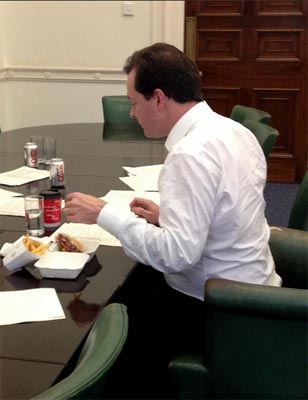 A perfect storm of food meeting British politics broke this morning. The Sun published a story about George Osborne's 'fail' at a man-of-the-people tweetpic he'd posted showing him scoffing down a takeaway burger whilst finishing up on his speech for the Spending Review. Seems the chancellor's big mistake was to opt for a burger from Byron rather than sending someone out to McDonalds.

"It was a gourmet meal from a trendy diner" roared The Sun, whose investigative reporters had deduced that the burger in question was from 'new chain Byron'. "It was ordered from one of its branches in Waterloo 1.6 miles away — snubbing TEN closer McDonald’s outlets where burgers start at 99p."

Twitter has taken to this story with glee. Daily Mail feature writer Guy Adams pointed out that he was "Amazed George Osborne is attacked for sourcing his burger from a small, British producer as opposed to a Yankee junk food corporation."

The Telegraph's Harry Wallop broadly agreed, but added "Byron Burgers is owned by Cinven - huge tax-lean private equity behemoth". MSN's Tom McArthur also had a point to make "He doesn't even put his chips in the burger box lid. How can this man be trusted?"

"We have no beef with the man," Byron founder Tom Byng told Hot Dinners this morning when we asked him for his response to the story. "At least he used his hands."

Perhaps our favourite response to the story so far has been from Ruth Barnett, head of communications for SwiftKey and former political & tech journalist at Sky News who tweeted "Ps How long til Byron rush out a novelty Osborne burger with a pun about "prime cuts"...?" Now there's an idea.

"It's been an amazing journey for a humble hamburger joint and I do think we've got a few twists and turns ahead." Spookily accurate words from our previous interview with Burgermeister Tom Byng, founder of Byron. Read the full interview with Tom here.